In the morning we will pick you from you Agra hotel, later you will be driven towards fatehpur Sikri enjoying the comfort of your own car. It would take nearly 1 hour when you reach the ghost city. Now get ready for a guided tour of the marvelous palaces. You explore the famous palacessuch as Deewan I aam , Deewan I khaas, Panch Mahal Turkish sultan’s palace, mariam’s palaces Beerbal Palace and many other palaces.
After visiting the palaces move towards the religions section located close by.This section comprises of the tomb of great sufi saint salim Chisti. Royal mosque and Buland Darwaza. Here you feel the pulse of sufi Mysticism. The holyman’s tomb built in white marble would certainly mesmerize you. After finishing Fatehpur sikri tour return back to Agra in the same car. En-route to Agra you stop at Akabar’s tomb at sikandra. This beautiful tomb of emperor Akabar was planned by the emperor during his lifetime in 1602. As he died the remaining work was completed by his son. The tomb is built in typical Char Bagh style with an imposing gateway to enter. The tomb is set amidst the four quartered gardens. You can take instagram worthy pictures and later move towards Agra.Now you can enjoy short shopping spree. Later we transfer you to your hotel or at the railway station. 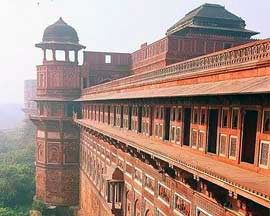