The perennial river the Ganges has always been a part of Indian society. The major cities of north India located on the banks of the river were the famous places of culture and trade. Besides the famous Ghats of Varanasi, Haridwar and Rishikesh, you also find the Ghats on the Ganges in some other places.  These have been very significant in the ancient history and mythology.

The Ganges Ghats are the points which have river front steps leading to the bank of the river. The Ghat making tradition is very old in India and can be traced back to 13th century or even before. In the ancient times the Hindu rulers or the trade haunches used to build Ghats on the famous river like Ganga and Yamuna.

The purpose of Making Ghats of the Ganges

The prime reason behind the construction of Ghats was to provide a good bathing place to the pilgrims. Sometimes the river bank was quite down and was hard to be  approached, thus by making the concrete or brick steps people used to reach the bank easily. On the banks many  Pandas or Joshis used to sit to bless the people or to provide them help in Ganga Aarti.

The other purpose of making the Ghats was to provide a cremation place. In the Hindu religion it is considered a boon  to be cremated on the bank of the Ganges in Varanasi. Besides these purposes the Ghats was to serve as a place for boating for fun and for trade and commerce.

The word “Ghat” is supposed to be derived from Ghat word ,which means the valley of the river. As these rivers used to make valleys and it was hard to swim, bathe or worship, the custom of making of Ghats started.

Ghats on the Reservoirs

Besides the Ghats on the holy river Ganga and Yamuna almost many other rivers of North and South India has the tradition of Ghats.

In many religious sites like in Pushkar we find lots of Ghats around the Brahim Sarovar. Similarly if you go and visit Machkund you again find the large pond having hundred of staircases leading down to the water.  In the city of Mathura again close to the Krishna’s Birth Place you can find such large pond with staircases. 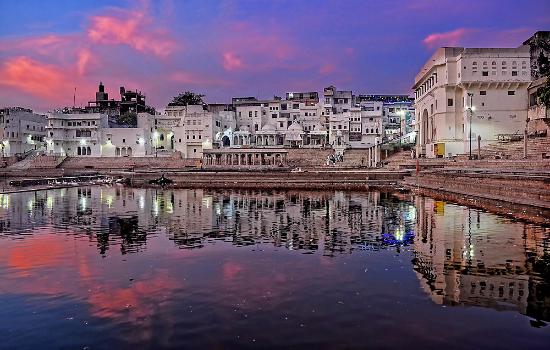 Panchal Ghat of the Ganges , Farukhabad

The city of Farukhabad has the history with the Mughal ruler Farukhsiyar, but the area has thousands of years old history of the Mahajanapod period. This area used to be prominent Panchal Kingdom. Draupadi the princess of Panchal was  married to Pandvas. In the English time the Ghat near Farukhabad city was named as Ghatia Ghat, which signifies bad quality ghat. Later it was named as Panchal Ghat. In the monnth of hindu month mah which normally falls in December of January ,a big fair is arranged called Ram Nagaria which lasts for one month.

People come to this Ghat for bathing and worshipping the river. Many times you can see the Ganges shadowing ceremony which is done by saris tied to each other. This is done by boat by the pilgrims ,if their wishes come true. 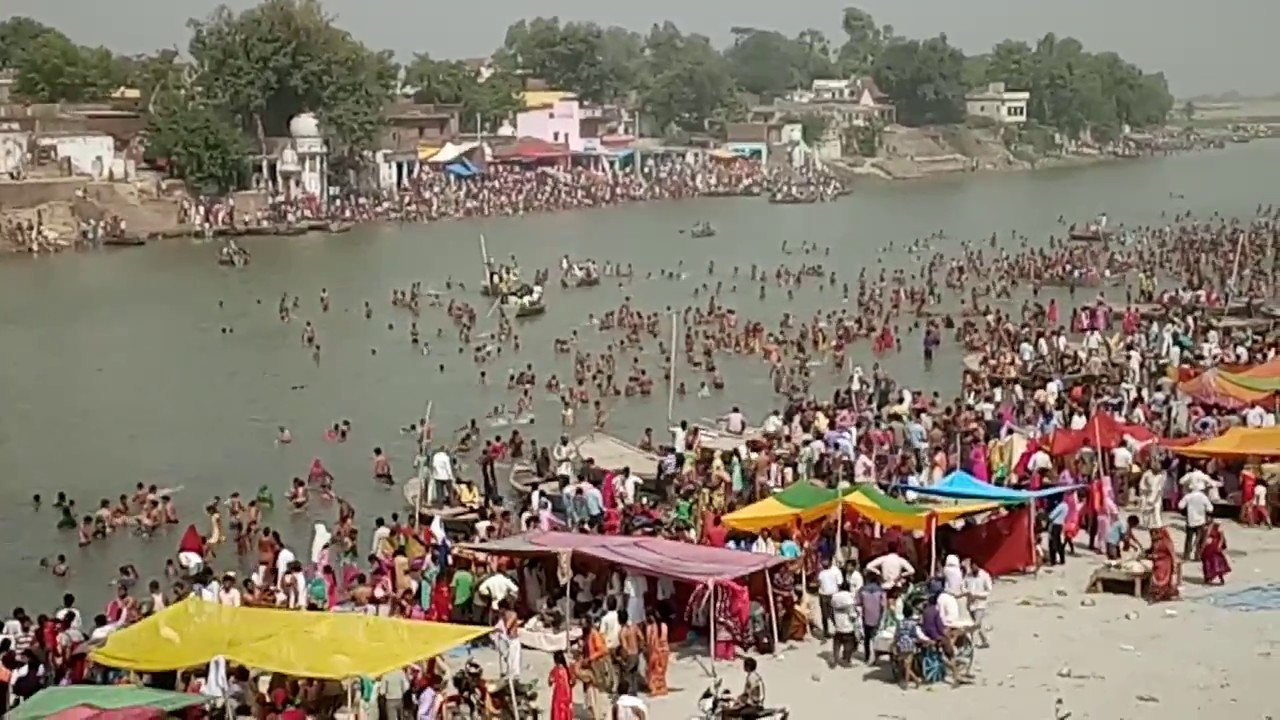 Soro Ghat – Soro Ghat is well known in the Indian legends as shookar khetra. This Ghat is in Kasganj district of Uttar Pradesh. People go to thus place a special Ganga bathing days like sharad Poornima. Makar Sankrauti etc. Besides the holy bath and death rituals on the Ganga Ghats, you can visit some famous temples of Soron like barah Bhawan Mandir, Raghunathji mandir. You can also look sitaramji Mandir which is considered the oldest, but now in rains as it was destroyed on the behest of Aurengzeb. 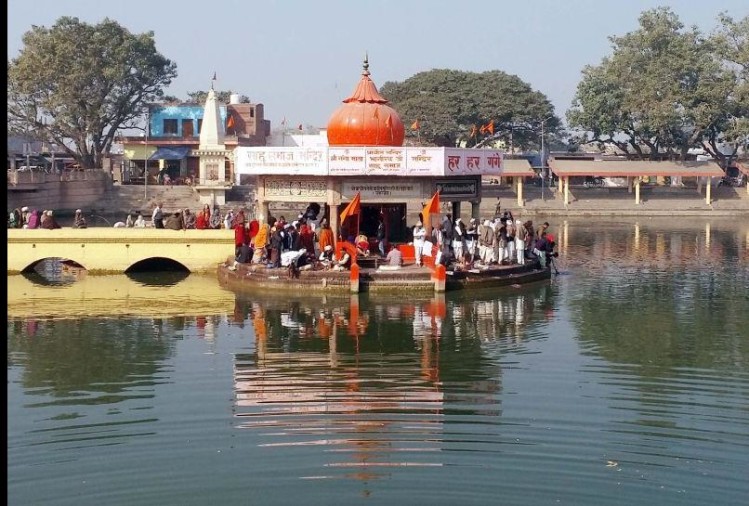 Kachla Ghat – This is another neighboring Ghat close to Soron on the Ganges. Thus place is thronged by the people from nearby districts. 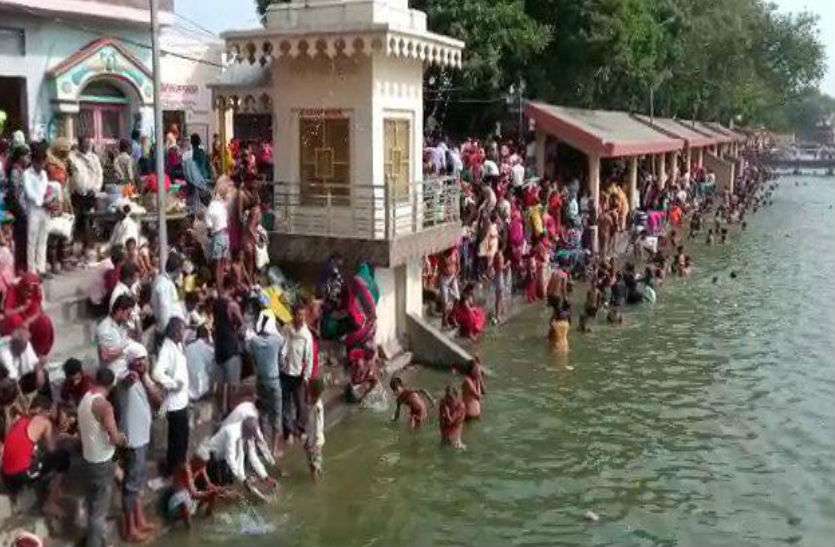 What are the Famous Ghats of the Ganges in Rishikesh?

The Ganges after passing through the hilly terrains and controlling it’s speed and velocity, starts getting calm. The beauty of the Ganges can be behold from the following Ghats of Rishikesh.

Triveni Ghat – This is the biggest Ghat of Rishikesh. This remains busy with the people who come form different parts of India and  overseas to have a holy dip in the river.  Some people come to do the last rites of their ancestors. This Ghat has every day Aarti ceremony with the Chanting in the praise of the Lord  Shiva and Goddess Ganga. The legends say that Lord Krishna also visited this place when he was hurt by the Hunter.

The early morning Aarti is done at 05:45 to 06:30 Am while the evening Aarti is conducted between 06:00 to 07:00 Pm ,when thousands of pilgrims witness this auspicious ceremony. Several performers with huge and traditional Deepak and burning flames worship the goddess on the chanting of Mantras.

Rishikesh has two famous iron suspended bridge over the Ganges namely Laxman Jhoola & Ram JJhoola close to each of them you can find shanties selling souvenirs and steps leading to the river . Some people take bath and fill the water bottles with holy water to carry their homes. 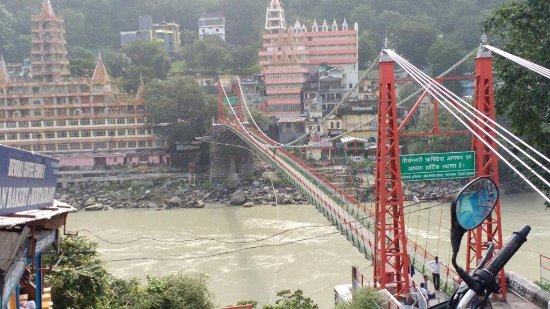 The culture, religion, life and economy of the twin  cities of Haridwar & Rishikesh  relies over the Ganges and it’s Magnificent Ghats. On these Ghats people devote their full reverence to the river Ganges as Goddess. Following are some prominent Ghats of the Ganges in Haridwar —

Har Ki Pauri- This is one of the most famous Ghats of Haridwar. This is the first place where the Ganges touches the plains. This Ghat is also known as Brahma kund where you can see the work of Lord Vishnu’s feet. It is considered that during the stifle which commenced after the ocean churning between the angels and demons, the nectar drop fell on earth on four places- Haridwar, Allahabad, Ujjain and Nasik. Thus in Haridwar this ghat is considered holy.

This place has the occurrence of daily evening Aarti ceremony on the Ganges which offers an enchanting experience to the spectators. Thousands of people are seen taking a holy bath and worshipping the river with burning lamps.

Ganesh Ghat– This is located close to Hanuman temple and is famous with the localities who come for picnics and morning walks you can spare some time in leisure, taking instagram pictures and having a view of the scenic view of Mansa Devi and Chandi Devi temple. 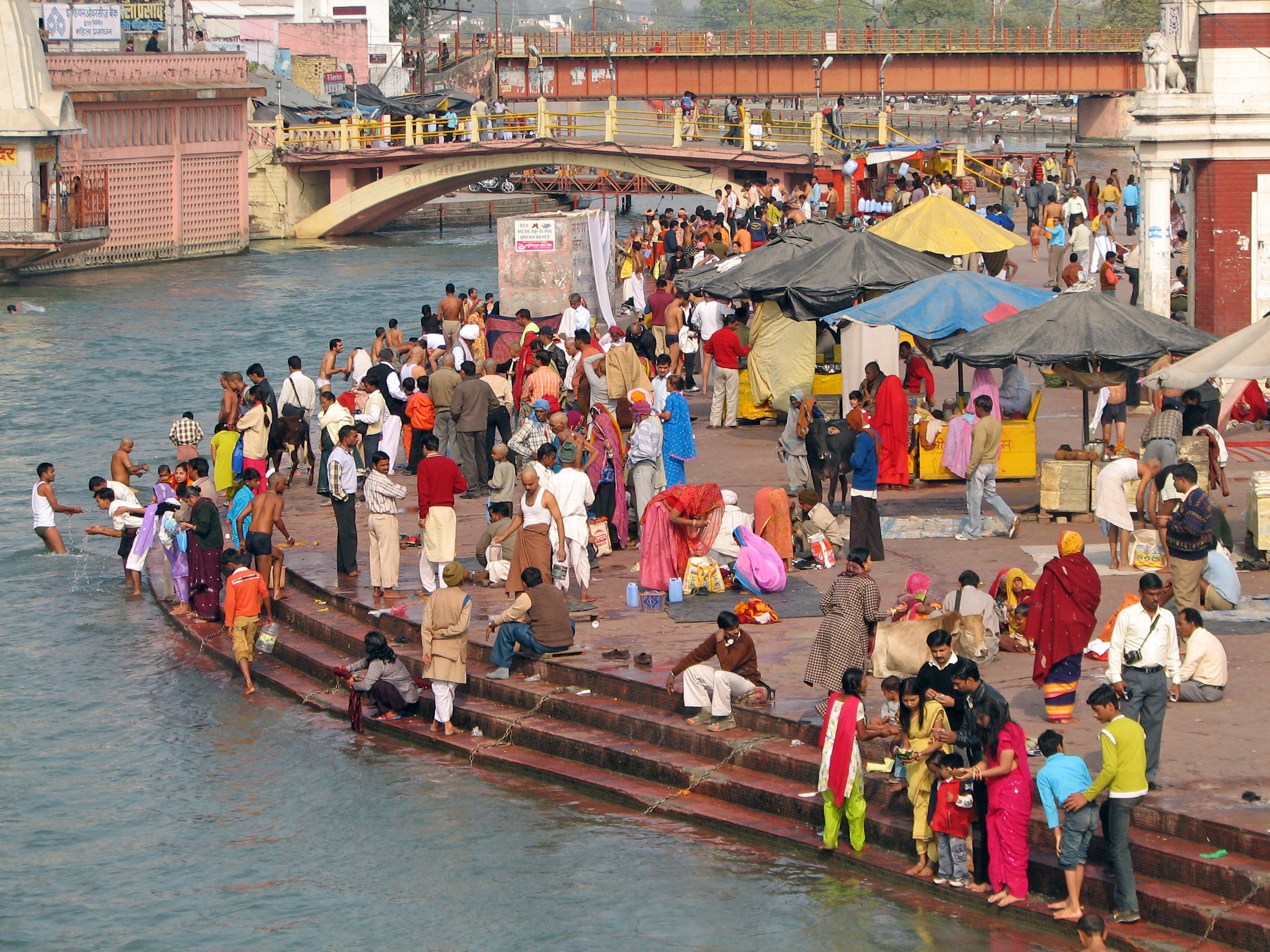 Kanpur is a city based on the river Ganges and has a famous religious place Bithur.

Patthar Ghat- This Ghat was built by Tkait Rai who was one of the prominent ministers of the Oudh state. This Ghat in Bithoor is made of red sandstone. On the Ghat itself you find a magnificent Shiva temple which has a shivlingam made of Kasauti stone.

Allahabad or Pryag raj has been a holy center of the Hinduism as this is the meeting point of three rivers- Ganga, Yamuna and Saraswati. Since ages this confluence place has been the venue of Mahakumbh Melas where millions of sages, locals from far and  wide come to have the dip in the holy waters of the Ganges.

Saraswati Ghat- This is one of the most magnificent Ghats of Allahabad presently known as Pryagraj. It is on the bank of river Yamuna. Close to this Ghat you see the famous temple of Lord Shiv- Mankameshwar temple. This Ghat is very close to Triveni Sangam where the strong citadel of Akabar stands erect known as Allahabad fort. Every evening this Ghat witnesses the tradition of Maha Aarti. 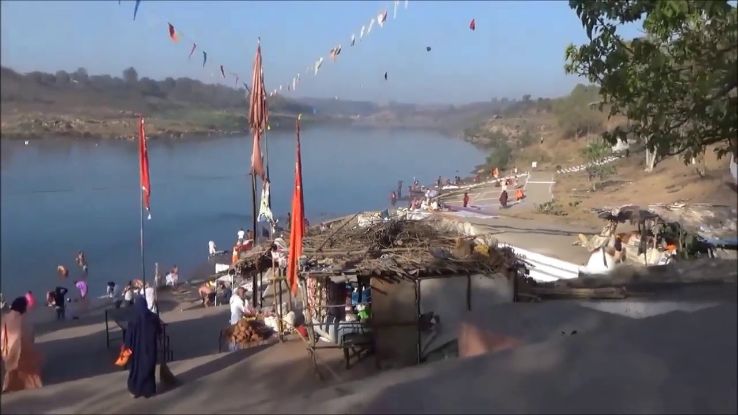 Bargad Ghat- This is another nice Ghat where tranquility prevails over the Yamuna water. Lots of localities come in the evening to enjoy.

What is Triveni Sangam?

Prayagraj is famed for having Triveni sangam. This is the confluence point of three rivers- The Ganges, The Yamuna and one legendary Saraswati river. Ganga and Yamuna can easily be recognized by the colour of their water. This place has been the center of devotion and Chanting since ages. The mighty rulers believing in Sanatan traditions were fond of visiting Triveni Sangam at the time of Mahaumbh and open to treasures for chantry. 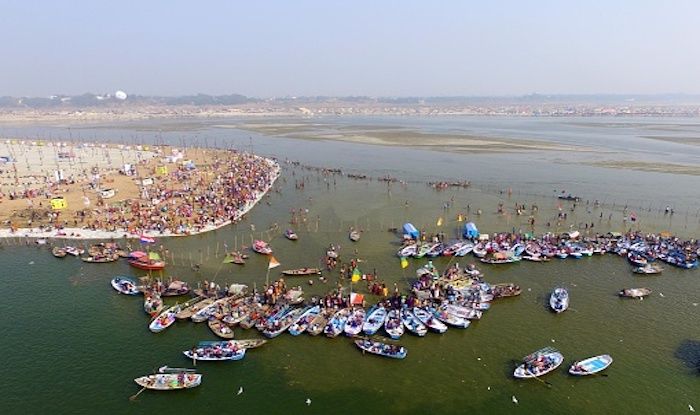 What are the Famous Ghats of Varanasi?

Varanasi is widely acclaimed as the city of the Ghats where since ages the famous Ghats are serving various purposes of religion and culture. The life of the city lies in the ripples of the Ganges. In this Shiva Nagari various devotees of Lord Shiva who have been the famous rulers, built many Ghats on the banks of the Ganges  and majority of them were devastated over the due course of time. Most of the Varanasi Ghats are rebuilt in 18th century by the Maratha rulers. The city has nearly 88 small and large Ghats.

Assi Ghat- This is one of the most famous Ghats of Varanasi which is located on the meeting point of Ganges with Assi river. This Ghat can be approached from the city by using a long street. This Ghat is not so crowdy as the other Ghats like Manikarnika or Dashashwameth Ghat. 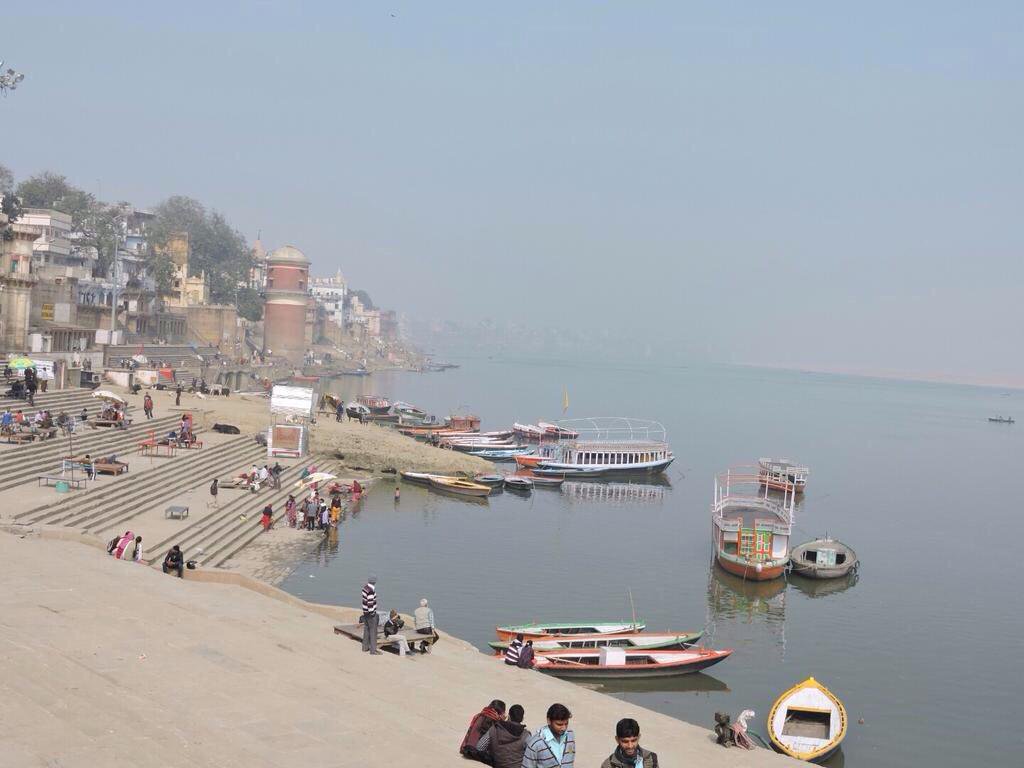 Manikarnika Ghat- This is considered very holy place for death ritual and thus thousands of bodies are cremated annually at this place as it is conceived that if one is cremated over huge, he or she is going to attain mokh (salvation from the cycle of death and rebearlth). Dead bodies are brought on the bier and cremated with all death rituals. The fire is borrowed from the Dame Raja and this fire is perennial. If you are bold enough you can go close to witness the rituals.

you can also read about Mathura holi facts –

Dashashwameth Ghat- This is one of the oldest Ghats of Varanasi which according to the legends is created by Lord Brahma to Honors Lord Shiva. It is believed before the initiation of the work Lord Brahma sacrificed 10 horses before the sacred Agni. The enchanting ceremony of evening Aarti is mesmerizing. Besides the small shanties, beggars, priests clad in traditional attire present a spectacular view of Indian culture while the priests involve themselves in worship of the river with incense, flames and flowers, people release thousands of leaf lamps on the holy waters.

Man Mandir Ghat- This Ghat was erected by the king of Jaipur Raja man Singh in 1600 and is built in Rajput style. In the year 1730 Raja Sawai Jai Singh added to it the stone observatory  which is  still infect.