Why Qutub Minar was built?

Minar is an Arabic word and literally means a tower. In the Islamic world, a mosque always has an accompanying tower, this tower was to facilitate the Muezzin (caretaker of the mosque) as he could go up the tower and could call people and say the ajaan. Qutub Uddin Aibak after conquering Delhi had started constructing a mosque named “Quwwat Ul Islam” meaning the might of Islam. This mosque was made from the debris of Jain and Hindu temple.

Who built the Qutub Minar?

A minaret was attached to the mosque but unfortunately, the sultan king died during the construction. Only the first story was completed during the reign of Aibak. Qutub Uddin Aibak was junior to the Muhammad Ghor(Popularly Known as Muhammad Ghauri) Ghauri defeated the famous ruler of Delhi Prithvi raj Chauhan in the second battle of Tarain. Aibak inscribed verses in praise of his master(Ghauri) on the minaret he was making. The name of the minaret was either inspired by the name of the maker or a Sufi saint Qutubudin Bakhtiar kaki.

What are the Qutub Minar Delhi entry charges?

Note:- All childer up to the age of 15 years are exempted from the fees

This cupola was an eyesore and didn’t really go very well with the flow of architecture of the minaret. Finally in 1848 by the order of lord Harding, this cupola was removed and the originality of the architecture was preserved, this cupola has been parked in the garden area of the Qutub  Minar and is popularly known as the Smith’s folly. 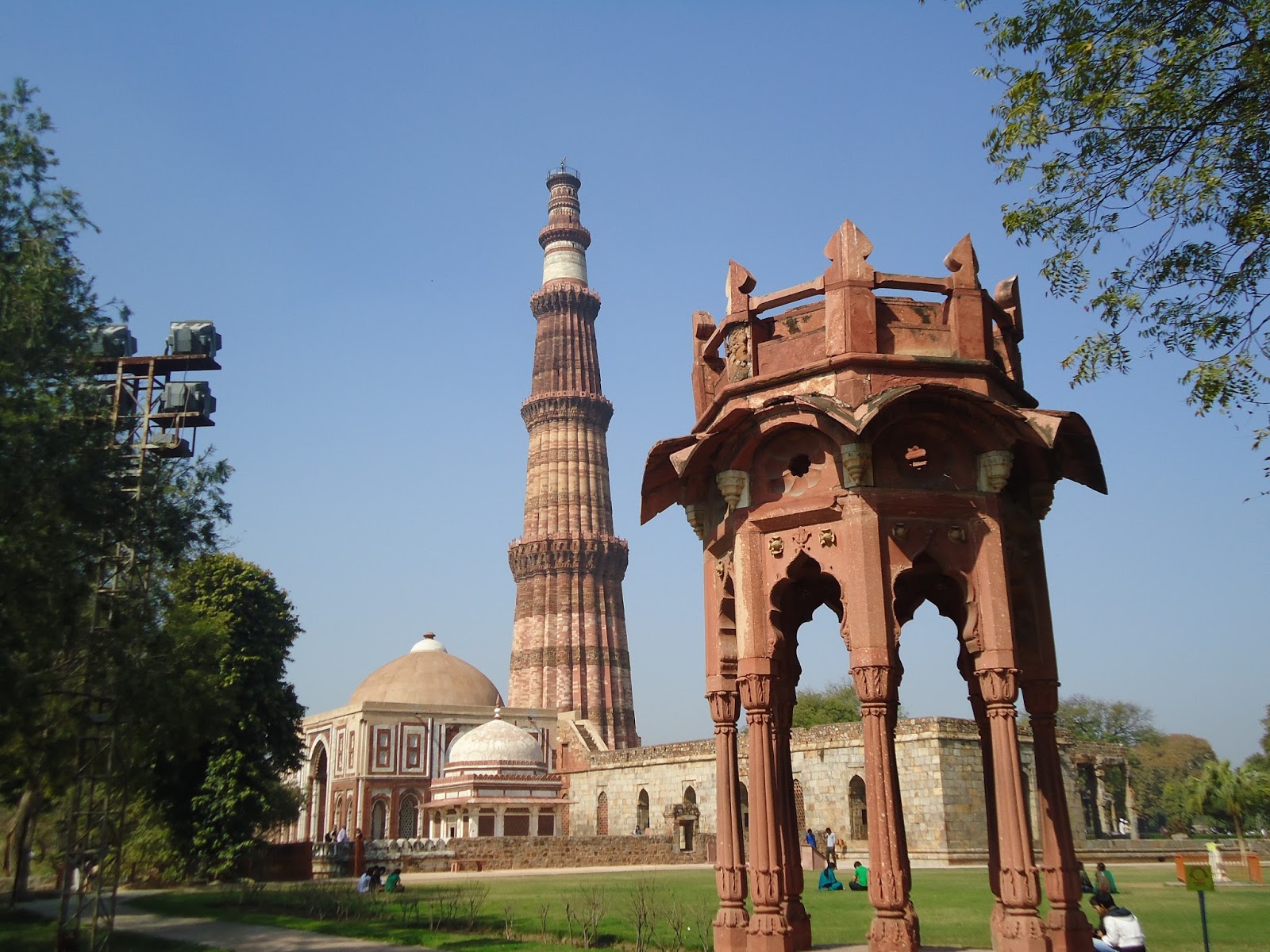 Electric strikes earthquake Qutub Minar- In 1369 the top story of the then minaret was destroyed in an electric strike. The then King of Delhi not only repaired the damaged story but added one more story to the structure. The fourth story added by Firoz Shah Tughlaq is done in white marble and the top story is a combination of white marble and red sandstone.  King Sikander Lodhi of Delhi repaired the minaret in 1505 as it was damaged in an earthquake in 1803 again a severe earthquake jolted the Qutub Minar and restoration and repair work was carried by the English in 1825.

The architecture of the Qutub Minar

The minaret is a cylindrical minaret rising 72.5 meters from the bottom. The minaret has spiral stairs inside comprising of 379 steps. No one is allowed to go up the minaret, the respective stories are separated by adjoined balconies. Islam negates the idol worship even representation of any life form is not allowed. The verses of the Quran decorated with floral figures have been inscribed on the outer surface.

Inspiration for the Qutub Minar

The Qutb Minar has been inspired by the minaret of Jam in Afghanistan. The Qutub Minar has a diameter of 14.3 meters (approximately 47 feet)  at the base while the top story reduces to a mere 2.7 meters (9 feet) the first three stories have been constructed using red sandstone while the top two stories also use marble in architecture. The ground three stories depict a design alternate of the conical and round surface. Eloquent carvings of the verses of the Quran interspersed with floral patterns, bells, lotus, flowers decorated the tower. The 72.5-meter high tower is not very straight it tilts a little (65 cm from its base) this little tilt is known to be safe and poses no danger to the longevity of the monument.

Why Qutub Minar is the icon of Delhi. 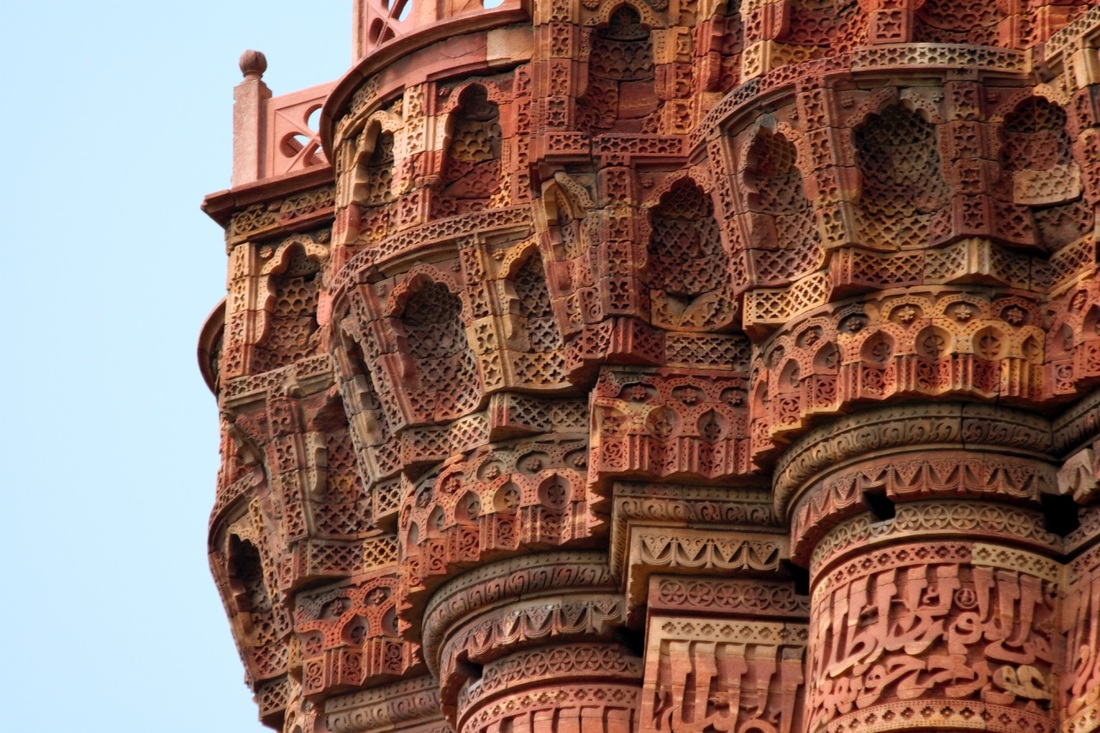 Qutub Minar is the iconic structure of Delhi. The Delhi metro rail corporation has photograph of this iconic structure as their brand image, for centuries this building was the tallest structure not only in the city of Delhi but perhaps entire India this amused the people of India and slowly Qutub Minar became the icon of Delhi. The south of Delhi is an upmarket area with fine restaurants and the posh MG Road very well in the vicinity of the Qutub Minar.

Qutub Ud Din Aibak was a staunch believer of Islam. He was general in the army of Mahmud of Ghaur he was the king who had defeated the Rajput ruler of Delhi Prithvi Raj Chauhan. Aibak being a rigid and staunch believer started construction of a grand mosque. This mosque is amongst the oldest surviving mosque of India. This mosque was made from the debris of 27 Jain temples which existed over here. The pillars have distinct Jain/Hindu architecture details visible.

These pillars are crafted from red sandstone these were plastered with a plaster of lime and mortar, the figures and figurines of Hindu origin were well covered. Indue course of time the plaster gave way and the original carvings became visible. All the pillars have distinct designs and patterns and none of them has been duplicated. The name of the mosque literally means “The might of Islam”. The successor of Aibak also added to the existing structure of the mosque. The arches made by Iltutmish are in reality more affirming to the Islamic style of architecture. 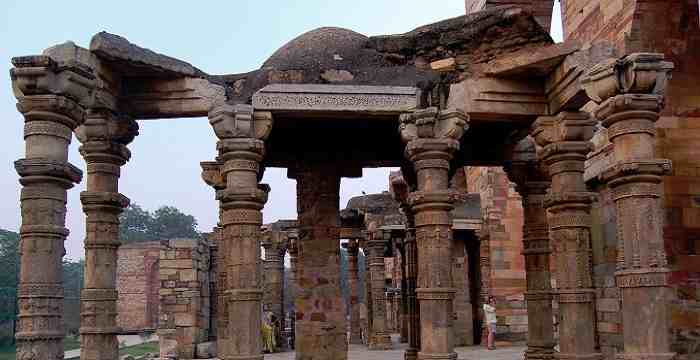 The Allahi Darwaza was made by sultan Allaudin Khilji in 1311, this was conceptualized as a grand gate of entry to the Quwwat Ul Islam mosque, The king wanted to make four gates of this kind but because of the unfortunate death of the King Sultan, only this gate facing southern side could be completed.

The architecture of Allahi Darwaza

The architecture is certainly more Islamic, The gate is square in dimension. The walls are unusually thick(11 feet). The gate has true Islamic arches and the first true Islamic dome on the top. The dome is 14 meters high, The gate is an excellent example of the latticework in red sandstone. Marble has also been used in adorning the gate, the carvings look like being done on wood. The geometric patterns, floral patterns have been used. From inside the room is truly ornate. The carvings look like a fusion of Turkic and Indian designs.

In the compound of Quwwat ul Islam mosque stands another marvel an Iron pillar supposed to be crafted in the reign of Chandragupta II who is also known as Vikramaditya(375-414 AD). The amazing fact about this iron pillar is that in all these years out in the open it has sustained the vagaries of weather still there is no effect of the natural phenomenon of rusting on this pillar. The metallurgy and chemical composition of this pillar is amazing. This pillar is 7.21 meters high and the weight is around 6000 kilograms. This pillar was brought to this place by Anangpal Tomar the King of Delhi who had built a grand Vishnu temple at this place, this pillar is a Vishnu dhwaja(Flag pole of Lord Vishnu), before being brought to this place it was a part of the Vishnu temple complex in Udaygir.

Sultan Allaudin Khilji the sultan of Delhi renovated the Quwwat Ul Islam mosque. New arches were added to the pr existing mosque. The Sultan decided to make another grand minaret for this huge mosque. This Minar was supposed to be twice the height of the existing Qutub Minar(72.5 meters), The construction started but unfortunately due to the untimely death of the Sultan in 1311 AD the work stopped. The minaret then stood at 28 meters (first story). Today this giant uncomplete minaret is a huge pile of boulders and rubble, this was the core of the new Alahi Minar the outer core of red sandstone was not yet added. 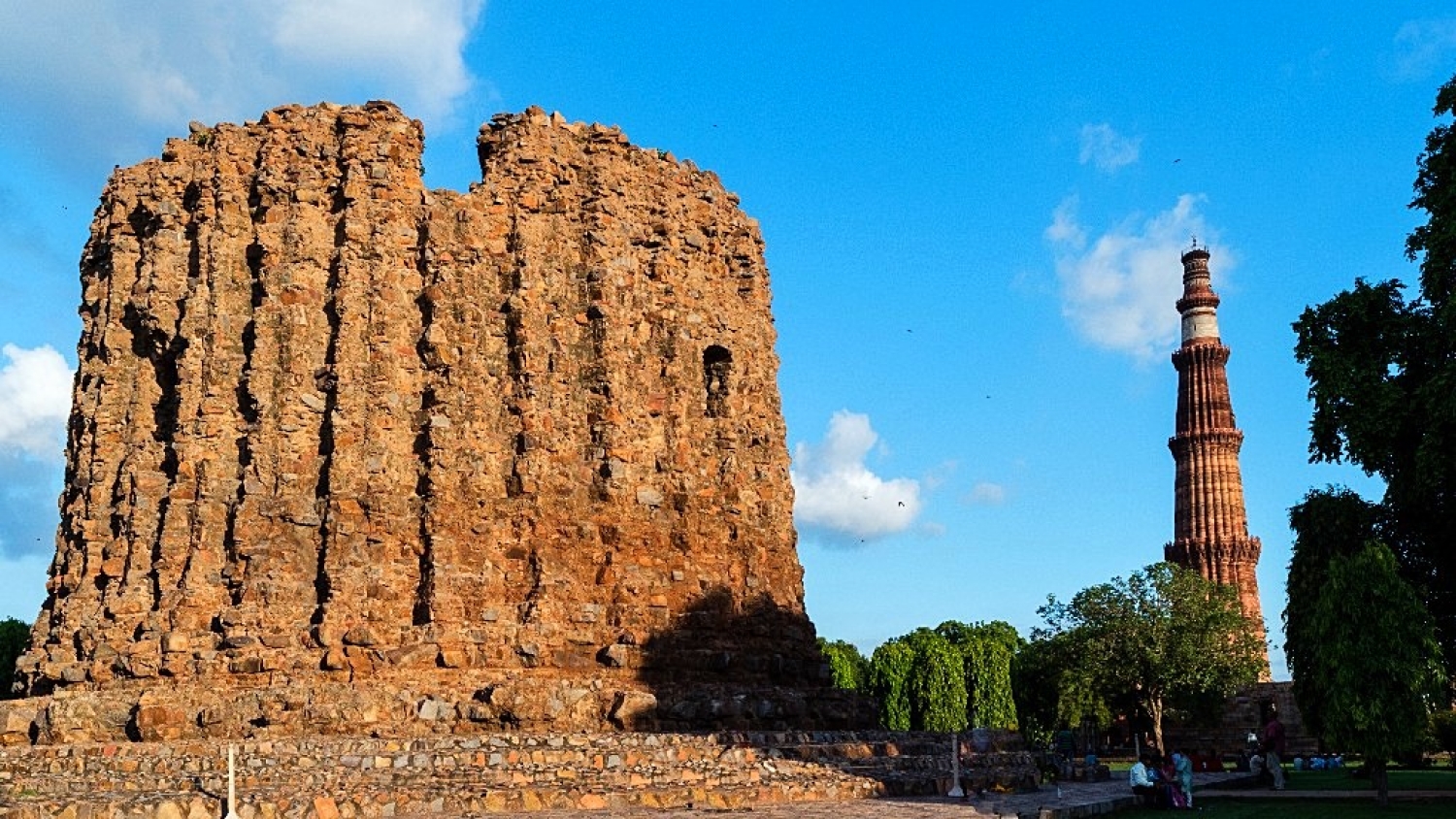