Aarti is a ritual performed to appease the deity. It is a sort of song sing in front of the God or goddess with the accompaniment of oblation and clarion. Arti is spelt in different way as Arti, aarthi or Aartha etc. The word has origin from the ancient languages of India such as Sanskrit and Telgu. It is considered that the word Aarti has the origin from Sanskrit word Aartika which devotees the removal of ratri or darkness and in this process light is waved in front of the idol.

Arti traditions are supposed to be derived from the Vedic ritual of the fire worship. During the Aryian era the homa or the fore worship was in vogue. In the modern Aarti ceremony there is the amalgam of Vedic traditions and neo rituals. Major indigents of Arti one flovers, incense, fire, ghee peacock pluns, rice, vermillion, bells, clarion etc.

According to the Hindu legends there are 5 elements in the universe and the human body is also made of them. Such elements are called Chhiti (Earth) Jal (Water) Pavak (fire) Gagan (Sky) Sameer (Wind). During the Arti ceremony there is the presence of all 5 elements of nature. Water pot or Kalash is given prominence with all sorts of worships. The earthen lamps with burning wicks devotees fire element flowers and incense represents the purest set of mind Ghee or better devotees the Earth element.

How Arti is performed? 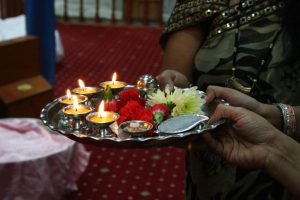 Arti is performed normally at dawn and dusk in the houses. Similarly at the temples it is performed five times daily. It is normally performed with the opening of the temple. In the temples lord is considered to reside in worldly form rising early, having lunch, having siesta and after dinner neutering for overnight sleep. Thus with the morning ritual Arti ceremony starts with Mangla Arti. In the Ati ritual a grand plate is prepared with Aarti. In the Aarti ritual a grand plate is prepared with Aarti lamps and it is waived in clock wise direction around the deity and the rest of the congregation indulge in singing Bhajans or prayers to alore the deity. The Aarti plate is made of copper or bronze and a lamp made of Kneaded flour or metal is placed full with ghee. Besides incense, flowers, camphor is also given place. Thus the practice of Arti is dare to show the gratitude towards the deity which bestows the incessant mercy on the mankind.

The Hindu religion has long traditions of Arti songs. Different sects of Hindu Religion have different Aarti versions. The vaishvarties and Shaivitis. Some of the Aarties certain the short life and deeds of the deities. The most common Aarti as are Om Jai Jagdish Hare, Om jai Shiv Omkara, Om Jai Gange Mata etc.

Ganga Aarti –  As the sun God descends down riding his chariot and the sun beans starts fulling on the pristine Ganges water, it is the time for Ganga Arti. In the Hindu religion the Ganges is worshipped as an embodiment of human being. In this devotional ceremony people worship the river with a lit lamp, incense and flowers and they foat a plate of paper on the river as offering. In the mean while the priests involve in the grand worship ritual having dozens of burning oil lamps and waiving then while same others giving a clarion call and ring the bells. This grand ceremony can be witnessed on the Ganges banks in Haridwar Rishikesh and Varanasi.

Ganga Aarti in Haridwar takes place at Har ki Paudi. This attracts the religious devotees across the country and from entire globe. In this ritual of light and sound the priests pray the river Goddess with bowls of fire and chumming the bells. This eceremony is done every day in Haridwar and Rishikesh for nearly an hour and thousands of devotees assemble to witness thos eloquent ceremony.  Ganga Arti Haridwar timing are 5:30 Am to 6:30 Am and in the evening 6:00 Pm to 7:00Pm. In Rishikesh Ganga Aarti is held at Parmarth Niketan. 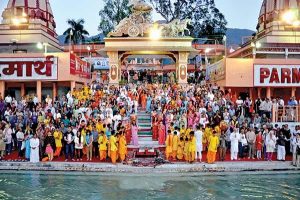 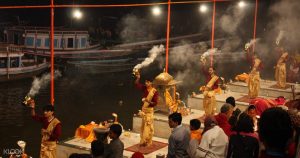 Varanasi Ganga Aarti is held at the time of dusk at the famous Dasawedh Ghat which is located near the Kashi Vishwanath Temple. The energetic pundits involve themselves in this pageant blowing the couch shell and keep on warning the fire flames facing the Ganges. The movement of their hands synchronizing to the chanting of Vedic hymns.

Varanasi Ganga Arti starts at 6:00Pm and in order to get a close up view the spectators starts gat having at 5:00 Pm. There are so many nearby shanties from where are can have a look or you can hire a boat to utness this grand ceremony. 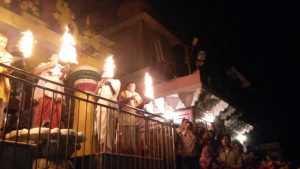 Mathura and Vrindavan have iconic temples dedicated to lord Krishna. As a devotee, you can visit the famed temples such as Krishna Janabhoomi, ISCON temple, Bankey Vihari temple, Rangjee Temple

Top 10 places to visit in Rishikesh