Death is a universal truth of the universe as rightly said by Thoma Gray –“The paths of glory lead but to the grave.”Death signifies darkness and uncertainty. Thus it is always associated with black, ambiguity, and mourning. Different religions in the different parts of the world adopt diverse death practices. Read about Hindu Death and Funeral Rituals

Different religions and civilizations have evolved different methods of disposing of the course according to the feasibility and geographic situation. In some religions, burial is more common like in Islam and Christianity whereas in Hinduism cremation is a prevalent tradition that is done with several other death rituals. Similar is the case with Buddhism, Jainism, and Sikhism as these religions are the offshoots of Hinduism.

The ethos of Hindu religion is based on the philosophy of the Bhagavat Geeta which says,” the soul cannot be harmed by cutting nor it can be immolated by fire nor can be perished by the force of water. Rather it is immortal and after leaving the old body it enters the new body according to the deeds done in the previous life. Thus this sort of belief is the pivot of reincarnation and rebirth philosophy. So most of the Hindu death rites are performed keeping in mind this root principle.

As in the Hindu religion, there are various sects thus the death rituals may be slightly different to other places and regions, but in most cases, people do cremation barring few cases of saints and children.

What is a Hindu funeral?

According to the Hindu religion, there are 16 sanskaras n the life of an h with lots of rites unman being and death ritual is the last one. Thus it is done lots of rites. Major rituals are performed at home keeping in mind the last journey of a human and hoping for his or her salvation or rebirth in a good YONI. Hindu funeral ceremony can be classified into 3 segments—

Why nose is plugged with cotton after death?

To some people, it may appear very strange but it fact that in the Hindu religion immediately after the demise cotton is put on the nostrils, thus the nose is plugged. This is being done since the advent of the Hindu civilization and even modern science approves it.

After death body loses its resistance to germs and many gases are released due to the decay of the food in the digestive system. Later the germs start escaping from the body during the decaying process. Just to stop such activities the cotton is put.

The corpse is put on the floor

Just after the heart stops functioning and pulse rates drastically come down, the body starts cooling down until it reaches room temperature. Now a drowsy numbness appalls and this stage is known as Algor Mortis. This time the decomposition of cells starts. Just to prevent the spread of bacteria from spreading in the bed or other clothes, the body is taken down. Before this, the activity of cow donation is done in which the tail of the cow is touched by the deceased in later given to the Brahmin.

If it is possible in some cases the body is taken down on the ground even before death. It is placed either at the entry gate of the house or some other point as every visitor can see it easily and the head is placed towards the south. All the family members and the near ones sit on the ground close to the body chanting prayers and they also put incense sticks.

What are the last rites before cremation?

The last rites of Antim Yatra also vary from place to place. Normally on the arrival of all relatives and kith and kins within a day or two of the death, the process of funeral starts where the dead body is bathed and embalmed. Sea same oil is applied to the entire body and it is prepared for its last journey to the crematorium by putting on new clothes as it is going for taking part in some function.

Now bamboo sticks and other articles necessary for cremation are brought. Those from society who have expertise in making Arthi or bier prepare it and then the body is finally put over it. If the dead one is a male his body is covered with white funeral shrowd, in case it is of a lady it is covered in red cloth. Then the toes are tied together with a string Shawls are offered and everybody offers flows and prayers.

Journey to the crematorium

The chief mourner and other relatives and family members prepare to take the bier on the shoulders reciting the name of the Almighty – the ultimate and eternal truth. In modern times people use carriages and bans and after certain walking the corpse is put inside the van and other people also sit with the body as long as they reach the crematorium.

Since ancient times it is customary to cremate on the Ghats of the river Ganges or other famous rivers. On the way to the crematorium, certain rituals are performed and the body is taken down on the ground and the direction of the body is changed. The reason behind this is that it is considered that the soul which has a long affection with the home and the family members can not reach back to home, it can be misleading this way by changing directions twice. Read More blog:- Get To Know Before Visiting Taj Mahal

How the pyre is made?

As the body is taken to the Ghat, it is placed on the platform and anointed with the holy water of the Ganges. Now a pyre is prepared of wooden logs and straw and body are put on it along with some other inflammable objects like ghee, sugar, ral, etc. The bamboos of the bier are thrown aside and the face of the deceased is shown to all which is the last darshan.

The chief mourner who is supposed to light up the funeral pyre makes perambulation around the pyre thrice with a pot made of clay and full of water, holding it on his shoulders. A leak is made out of the pot so that water can come out and thus signify that the soul is leaving the body. Now the chief mourner sets the pyre on fire and touches the feet, thus bids goodbye to the soul and his associations with it. 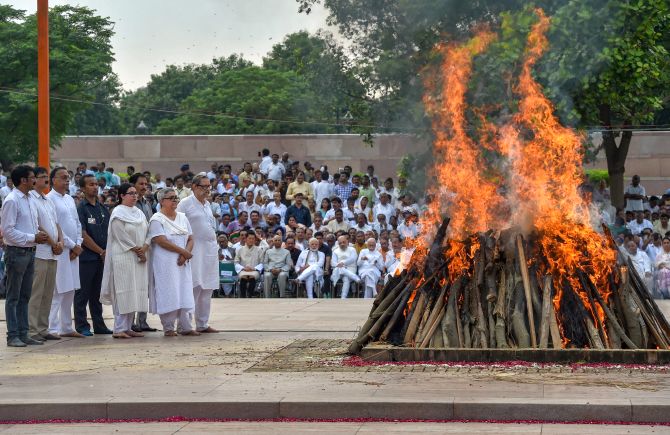 What is done with the ashes?

On the second day of the cremation, the chief mourner along with the other members approach the crematorium and gather the mortal remains from the pyre. Presently in the case of electric cremation, they also provide the ashes. Later the family members go to the Ganges to immerse the ashes into the Ganges.

What happens after the cremation?

After cremating the body all the people return home where each of them is given the leaves of the Neem plant and all do handwash which is a sort of sanitization.  Most of them take a bath to ward off the impurities. A lamp is lit at the place of death and the family members sit together. They don’t make food for at least one day and the neighbors provide them food.

On the third or fifth day shaving of the head of mourners is done when family members get their haircut and a meal is prepared of the choice of the deceased. A plate is prepared first and placed in front of the photo.

On the eleventh day, rice and curry are prepared in the home kitchen and all relatives partake in the feast.

Why do people wear white clothes during cremation?

In the Hindu religion, the person who sets fire to the funeral pyre is supposed to wear outfits such as dhoti and kurta during cremation, unlike Christian traditions where they put on black attire during cremation.

White is the color of peace thus this color provides solace and content to the soul and it soothes the bereaved on the other hands. One more reason is that the bereaved are also identified easily by other persons.