The Nomenclature of Metro Came From The Metropolitan Railway. A passenger train running underneath ground in an urban area is called metro train. The oldest metro is the London metro. The stations were made by the technique of cut and cover which could save the old building and can bring minimal damage besides London metro. Washington metro, Miami metro, Montreal metro are some of the classic examples of Metro network around the world. India took a deep plunge in rapid transit system in late 20th century. Kolkata metro initiated in 1984 was the first metro, Delhi Metro is India’s first modern metro. Metro lines in India are standard gauge and broad gauge. Most of the metro projects use standard gauge. Delhi the capital city of India in the 1900’s had a looming lacunae, the large metro city had no successful conveyance system which could serve the more than 10 million people living in this thriving metro. Reaching out from one corner of the city to the other was an arduous task, if the resident of south Delhi intended to travel to the north part of the city then it was like traveling to another distant town, then the city had an old ailing fleet of DTC buses which did the duty of Public conveyance. The next choice was auto rickshaws and taxis which were hard to be spotted more so the drivers of these commercial vehicles usually didn’t consented to the urges of the customers. These were the times when the people of Delhi desperately wanted a dedicated mass rapid transit system.

There were major hurdles in making the mass rapid transit system in a city like Delhi which had very densely populated area where no construction was possible there were many archaeological preserved monuments, building a train system with these challenges was indeed a great task. More so even constructing such a network in this bustling city was a great challenge.

With these challenges the Delhi Metro rail corporation a company was formed with equal participation from the Government of India and the Government of Delhi. Owing to the conveyance nuance Delhi in late 1900 had more cars then rest of the three metropolitan cities of India combined. This huge number of cars and public vehicles was creating havoc in Delhi, the city was losing its breath, the number of Asthma patients was much greater than any other city of India though even now Delhi pollution is a big concern but Delhi metro rail corporation has made a huge contribution in curtailing vehicular pollution in the city of Delhi. The DMRC is certified by the United Nations for its herculean contribution in reducing the carbon emission levels in Delhi. Today in 2021-2022 the Delhi metro is a huge network spanning more than 348 kms. Today it serves more than 1.79 billion customers who reach their destination safely and in comfort as all the coaches of Delhi metro train are air conditioned. The red line metro was inaugurated in year 2002, the imported trains were an attraction for the people of Delhi as they used to travel to north Delhi just to feel and enjoy a joy ride in the train.

The first metro line to be inaugurated was the red line in year 2002 by the then prime minister Atal Bihari Vajpayee. The Delhi metro has two kind of network, one is the elevated network with elevated train stations, the pillars of these rail lines are designed and engineered on the road dividers of the earlier existing roads so no extra space was used to construct this network, similarly the elevated network has huge elevated metro stations equipped with escalators and rapid lifts, their stations are an engineering marvel, in older parts of Delhi and in areas where space was a crunch the Delhi metro slips in to the underground mode. Adhering to all safety standards and precautions the excavation of these lines was carried in the night as transporting debris in these areas was not at all possible in the day time. 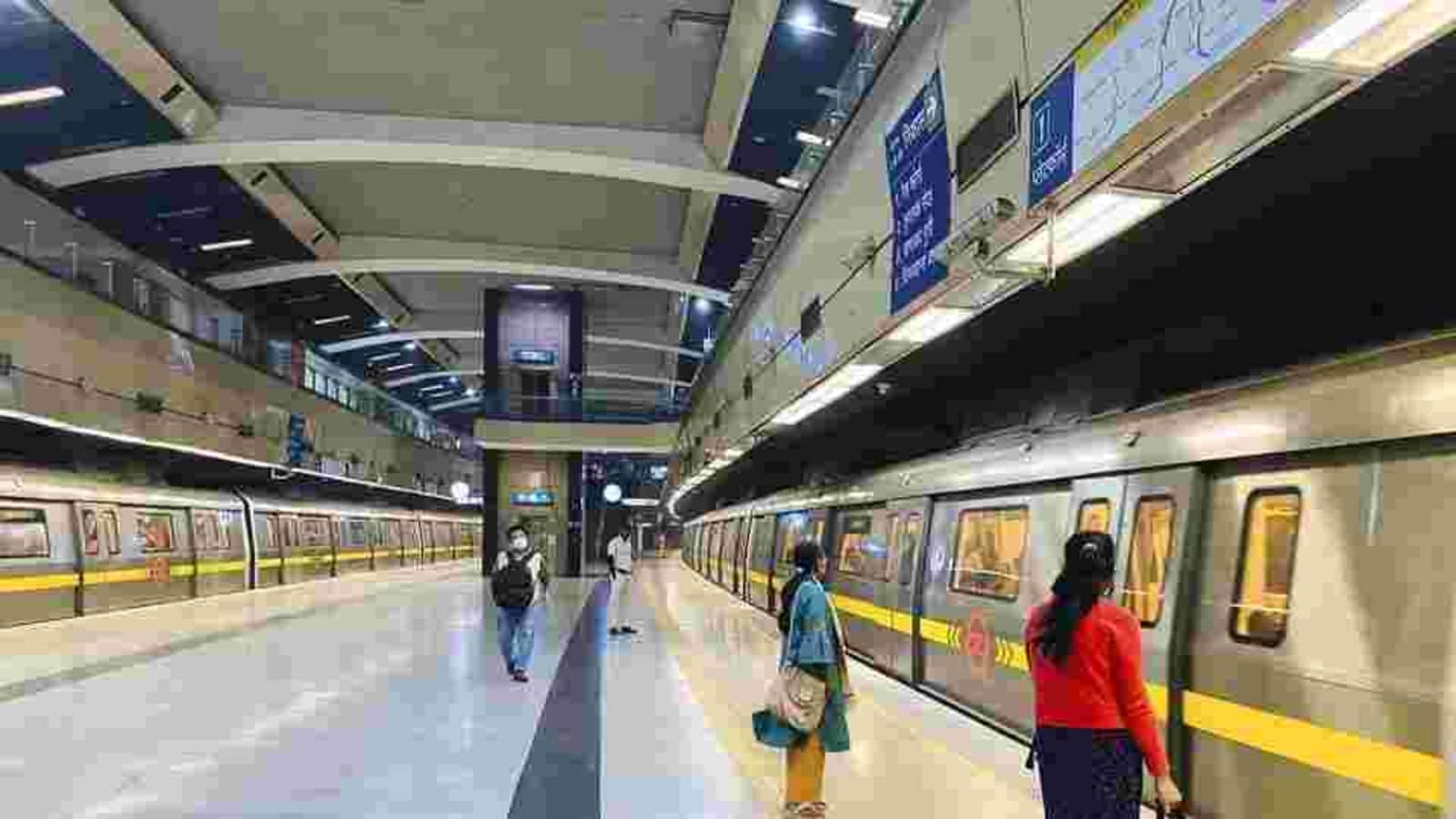 When introduced the ticketing system of Delhi metro was manual where the plastic coins for traveling were supposed to be purchased from the ticket counters, the staff were really efficient and fast. The ticket price was based on total kilometres to be traveled and entry to the station was through an automatic entry where coin was to be placed and the entry bar was automatically raised similarly at the exit station the coin was to be deposited and the automatic computerized system raised the exit bar, if there was a discrepancy in amount paid and the distance traveled then the customer was redirected to a booth where he could pay the balance or pay the penalty. Now the metro stations have automatic metro coin dispensers which when tendered the currency notes dole out the metro coins. The other mode is the Delhi metro card which can be easily issued from any Delhi metro station and the commuter can easily charge the card through Paytm or any other internet enabled platform.

All the metro trains in Delhi have dedicated reserved coaches for women. No men are allowed in these coaches. Every train has a women only coach in the front and at the end. If any male is found in the women coach then heavy penalty is imposed on the trespasser.

The entire construction of metro has been done in phases, the first phase of construction was started in 1998 and the first metro inaugurated in year 2002 on the red line as time passed two more lines yellow line and blue line became operational in year 2004 and year 2005, by the end of phase 1 the metro was covering a total of 59 stations with a run of 65 kilometers. The last structure of blue line between Barakhamba road and Indraprastha was added on 11 November 2006 serving total of 3 stations spanning 2.8 kms.

The yellow line again made news as the last station shahdara was extended to Dilshad garden, a total of 3 stations added and the opening date was 4 June 2008. A total of seven different lines were constructed in phase 2 a total of 86 new stations were added to the network of Delhi metro which till 15 August 2011 was serving a total of 145 metro stations in Delhi. The most remarkable aspect of phase 2 was the construction of airport metro connecting New Delhi station with Delhi Aerocity. A total of 124.90 kms in length were added to the Delhi metro in phase 2. New Delhi metro was slowly becoming a regular feature of Delhi land scape.

Again red line added 8 new stations to its existing network and increased its reach to shaheed sthal a total distance of 9. 41 kms were added to the red line with construction of 8 new metro stations. A total of nine different lines of metro were extended or made in Phase 3 with a total of 109 stations constructed from a march 2019 to the end of 2021. A total of 259 stations of Delhi metro today in January 2022 are operational covering a total of 349. 85 kms. Today metro has reached every nook and corner of Delhi and easily you can travel to any part of Delhi using just Delhi metro train.

A total of 40 lakh (4 million) passengers travel by the Delhi metro trains every day. The system is running pool proof with no major incident related to security reported in last 20 years of operations. The security of metro network is not in the hands of local police rather a special contingent of CISF( Central industrial security force) looks after the security needs of Delhi metro, the Jawaans of CISF personally aided by modern gadgets scan the customers, even the baggage is scanned similar to being done at the airport. The premises of Delhi metro are sparkling clean round the clock cleaning jobs done by the vigilant metro employees. The entire  network of Delhi metro is under the surveillance of security cameras so any on to ward incident is easily and promptly responded. The modern stations of Delhi metro have other basic services such as the automatic teller machines (ATM) of different banks and refreshment services. Some of the metro stations also have large food chain stores such as Mc Donald’s , KFC, Pizza Hut etc.

The stations are also equipped with modern escalators and lifts for patients and disabled, the washrooms are also functional providing basic facilities to the commuters. The announcements are made on the announcement system as well there is a proper LED display system announcing arrival of respective trains. There is barely few minutes difference between two trains running on a particular line so commuters have to literally wait very little to catch their train. This difference on the number of trains increased during the peak rush hour. There are shuttle buses available from Delhi Aerocity terminus to the IGI terminal 1, to facilitate the passengers IGI terminal 3 is connected by the airport metro. Airport metro is a big respite for the commuters who don’t have to commute on the Jam packed roads to catch their flights. The speed of airport metro is higher than the other metro lines and the stations are also few and long distance apart inspired from the success of Delhi metro the metro train has reached many other Indian cities, Lucknow, Mumbai, Jaipur, Kanpur, Many other cities are expected to join the list of cities having metro trains. Soon Agra a world famous city of the Taj Mahal will have a metro train connecting Taj Mahal, Agra fort and Sikandra monuments, It won’t take very long for the commuters to travel a total distance of 15 km between Taj Mahal and Sikandra.