Location- Hawa Mahal is located on the main road near the badi chaupad.It is very near to the famous monuments and famous bazaars of Jaipur. City palace and Jantar Mantar are just a two minutes walk from the Hawa Mahal monument.

The entry to the monument is ticketed. These are the rates of entrance tickets respectively for Indian and foreign nationals.

The façade which is the famous picture of the Hawa mahal is not the front end of the building,If you just want to have a picture of the building then you need not buy any ticket for the same but since it is situated on a very busy road and a very busy market so take appropriate security measure while you are busy clicking the Instagram worthy picture of Hawa Mahal, Take appropriate security measures while crossing the busy road . 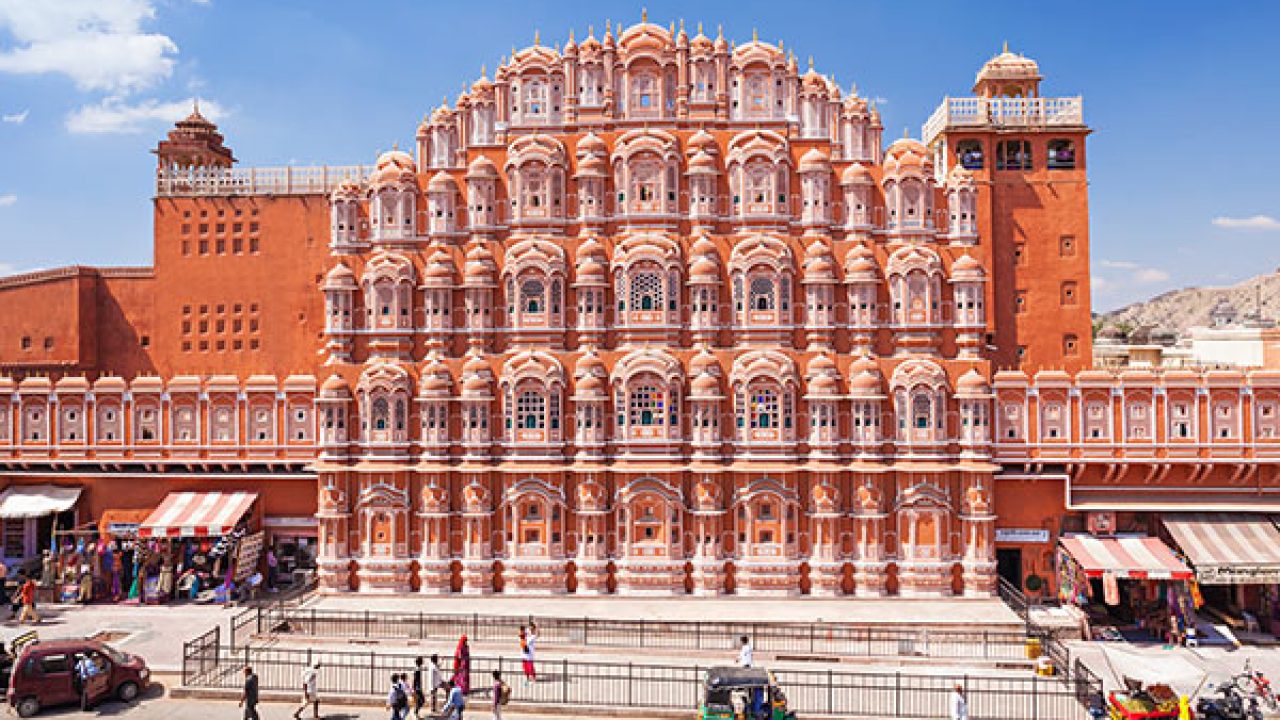 The best time and season to visit Jaipur and its monuments is obviously the winter season of Jaipur. The temperature is very conducive from October to March and facilitates tourism activity.

The word “Purdah” is of Persian origin. It means a veil or screening of a person (mostly women) from the rest of humanity. In Mughal times it was strictly followed and the royal ladies always followed the laid down rules of the system. The ladies of Zenana were not allowed to be seen or noticed by outside men this was done by specially designed palanquins, Naqab, Hijab, Burqah and specially designed Jharokhas (windows) in the royal palaces, these windows facilitated only one sided view while the ladies could watch the court proceeding without being noticed by outsiders of the court.The Rajput ruling clan of Jaipur had very close cordial relations with the ruling Mughal clan. This system of purdah found its way into the Rajputana and the royal ladies of the palace also started following it religiously. Though Burqa and hizab were not used by the Rajput women instead they used “Ghoonghat” a sort of veil or an extension of their clothing to cover their faces, The practice is even now followed very commonly in the rural folks of Rajasthan , On your Rajasthan tour you can see how rural women having long ghoonghat carry many utensils on their head and ferry water to their homes.

The classic and regal Havelis ( Bungalow) have a very common prominent feature this is called Jharokha. A jharokha is a sort of protruding window which are an integral and very important part of the designs of Rajasthani Havelis. One special reference of Jharokha was the custom of Jharokha darshan, a custom started by Mughal emperor Akbar in which he used to appear publicly on a jharokha of his palace. The public used to gather underneath the jharokha to get a glimpse of their favorite emperor. The king was sort of venerated by the gathered crowds this was a regular affair. This custom was also carried on by his son ( Emperor Jahangeer) and his grandson( emperor Shahjahan).

A fine city Jaipur came into existence in the early eighteenth century, Fine contoured avenues, spacious markets were an attraction of the new city. People came from far and wide to appreciate the beauty of the new city, The royal processions on the wide roads were cheered by the crowds but the ladies of the palace were bereft to this regal event. The ladies could not see and be a party to any royal parade and procession which were so much an integral part of any festivity. This all was because of the Rajput ladies following the purdah system. King Mahraja Sawai Partap Singh built a wind palace, a series of stacked Jharokhas looking like a honey bee comb. This was built to facilitate the royal ladies to be a part of the festivities and witness to royal processions and the hustle and bustle of busy bazaars without being noticed by outsiders. Alongside this picturesque view the ladies could enjoy the cool breeze blowing through the lattice screen windows. In 1799 the palace was ready. Laal Chand Ustad was the chief architect of this grand project. The Hawa mahal is the most photographed building of Jaipur city.

Read more blog:-  Get To Know Before Visiting Taj Mahal

The popular picture of Hawa mahal is not its front façade but it’s the eastern rear end leading to a busy road underneath. The hawa mahal is a five storied building it rises to 50 meters in height. The outlook of the hawa mahal is that of a bee hive or honey comb. The jharokhas are stacked up numbering a stupendous 953. The jharokhas or the windows are delicately carved from red and pink sand stone , the lattice screens look fragile and beautiful with curved dome tops. The first two floors have fountains inside to cool the breeze blowing through the lattice screens. Coloured glass panels have also been used, the upper three floors are nothing more than a room associated with the windows with no staircase leading up to the last two floors(only ramp), The shape of the palace resembles a crown some people say it was made to look like a crown of lord Krishna. There is a museum operating from the premises of Hawa Mahal. Hawa Mahal sure is a picture perfect icon of Jaipur city. 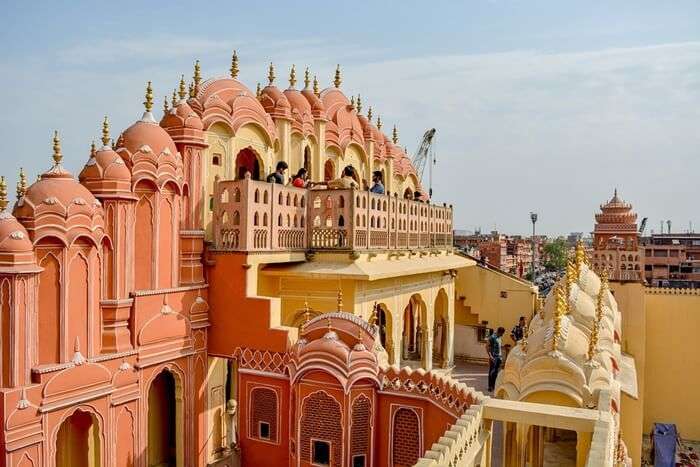