Location  of the City Palace

The city palace Jaipur is situated in the walled city of Jaipur. Jaipur is the capital city of Rajasthan state. There are three gates for entry into the city palace, The Tripolia gate is reserved for the royalty while the common tourist can seek entry through Udaipol and Virendrapol gates. City palace is around 2 kms from the Sindhi camp bus stand while the Jaipur railway station is another 5 kilometers.

There is an entrance fees levied on the tourist the details of the same are as follows:-

What is the special ticket of the City Palace ?

Jaipur is the capital city of Rajasthan state it has very pleasant winter season while the summers are very hot. The best months to visit Jaipur are from October to March. In summer time the temperature may go up to 49 degree centigrade (119 degree Fahrenheit)

History And Architecture of City Palace

This area of Rajasthan has also been called as Dhundhar, it is domain of Meena tribe ruled by Kachwaha clan of Rajput Kings.  The capital city of Amber was settled amidst Aravali hills the scope of further development and growth was not there, the water supply sources were also limited and few so the King Sawai Raja Jai Singh II started making a new city of Jaipur around 10 kilometers away from Amber. This was the first geometrically planned city of India. The designs were made in consultation with a vastu shastri (An ancient Indian science of Architecture quite similar to Chinese Feng shui) Vidhyadhar Bhattacharya. He was a Bengali scholar serving in the courts of the Jaipur King. The city was divided into nine blocks, while two were reserved for constructing royal palaces and state offices the rest seven blocks were to be used by the general public in making shops, houses etc.The name pink city is derived from the stucco painted pink around 100 years back to commemorate the crowning of King Edward VII. 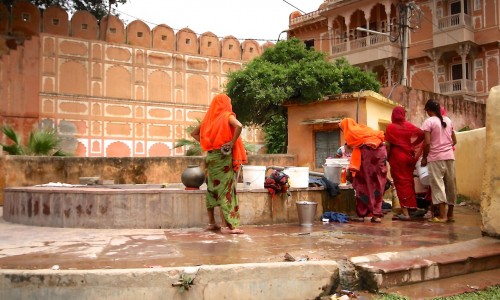 The pink stucco has been outlined with white colour border this attributes to the peculiarity of Jaipur city. In 1727 the Jaipur city was completed while the construction of city palace went on for generations as the successive kings renovated and redesigned the existing palaces according to their tastes and vogue. This is the only living palace, the royalty still lives inside the precincts of City palace. Many parts of City palace are maintained as they were under the royal era and rule of the Maharajas. A visit to city palace will take you on a visit to the bygone era. 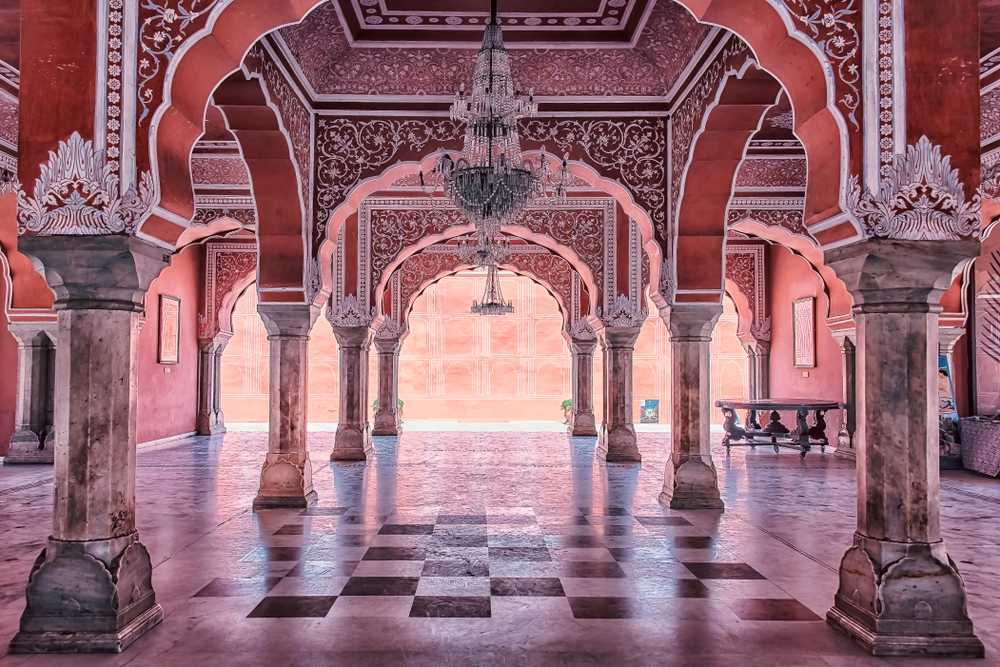 The City palace is a very well-designed palace with spacious avenues and courtyards, the buildings are old and charismatic, revealing the fine taste and reality of the masters who once lived here. The architecture is a mix of Hindu Rajputana style along with infusion of Islamic and cues from the Victorian era architecture.

The city palace is divided into palaces like Chandra mahal palace, Mubarak Mahal palace, Sarvato Bhadra, Sabha Niwas etc. The entry for common tourist is possible through Udaipol gate and Virndra pol gate though now only Udaipol gate is being used, It is a single storied structure with a beautiful arched gate having alcoves on either side, there are two regal caparisoned elephants on either side of the gate giving it a unique royal feel .As you move inside there are hairpin bends inside leading to the ticket window.

Buggy Khana-The ticket window has some shops alongside whereyou can buy some souvenirs from your Jaipur tour. The Buggy khana is a collection of horse carriages, Palanquins used in the bygone era. The state carriages used in the procession for carrying the deity are also on display, worth special mention is a Victorian-era carriage gifted to the Maharaja of Jaipur by the Queen Victoria. These carriages were drawn by a multitude of horses. A large courtyard which has a single storied structure on an elevated platform , this is an open verandah with enclosed rooms on four sides, the colour of the building is pink the arches are multi cusped with marble columns underneath. This was very similar to the Mughal court of Deewan E Khaas. A court where the king held private meetings with his consortium of ministers to solve the state problems. The ceiling has been decorated with classy crystal chandeliers. The walls are decorated with display of an array of spears and arrows.On one side of the building encapsulated in glass panels are two shining silver caskets. These caskets are 5 feet 2 inches in height. Made up of shining silver each weighs 34 kilograms and can store 4000 litres of water. They were made by melting 14000 silver coins by master silver smith in two year span. The king who was a staunch hindu drank only water from river ganges he took these caskets filled with ganga water on his tour of England .Thus these casks are called Gangajali. The sarvato bhadra was also a place for royal festivities and regal get together.

A large clock tower is visible from the sarvato bhadra. The clock was imported and infused a sense of discipline in the royal courts and palace. 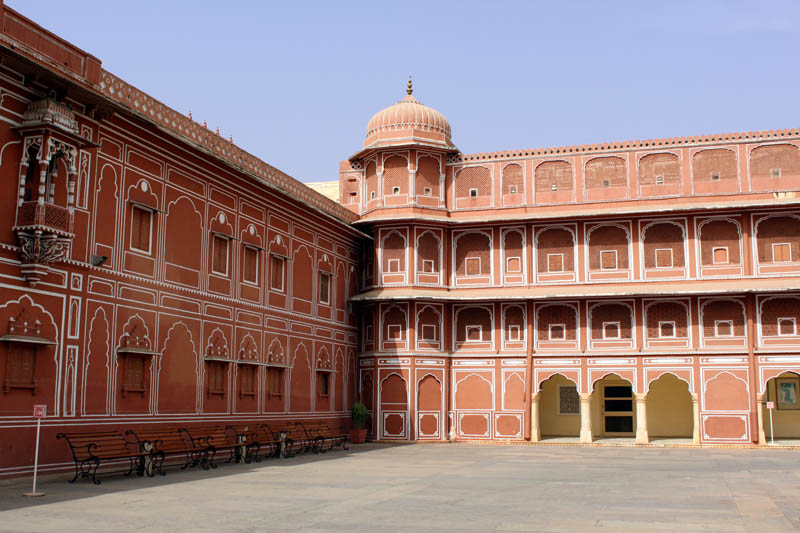 This is courtyard commonly called as the courtyard of four seasons. There are four gates opening into this courtyard, these gates have different design themes and are attributed to different Hindu Gods. The north east facing gate is called Peacock gate this gate represents autumn season and lord Vishnu is the presiding deity, Vishnu is known to be the sustainer of all life form. The north west facing gate has green colour with waves pattern fresco thus called “leheriya” it is dedicated to lord Ganesh the lord with elephant head and known to be God of auspiciousness. The gate towards south east has lotus pattern and represents lord Shiva and his consort Parvati,Shiva is the God of destruction this gate is a gate for summer season.The south west facing gate has rose petal formation thus representing the feminine power of the goddess.

This is the present residence of the Maharaja of Jaipur (if you are fortunate you might have a glimpse of him).A seven storied palace, only ground floor is open for common tourist ( you can visit the upper stories by buying a separate ticket). The seven storied palace is a dream destination and the palaces inside are nothing but a dream in real.The top story has the one quarter flag insignia of the Royalty of Jaipur flying high, the sawaai title was conferred on Maharaja Sawaai Jai Singh II by the Mughal emperor Aurangazeb. Since then a quarter flag flies atop the flag of Jaipur dynasty. The first two floors of Chandra mahal are called as the placae of pleasure (Sukh Niwas) the third floor is called as the palace of colours (Rang mahal) the name is derived from the colored imported glass work (imported from Belgium) this glass work is similar to the glass work seen in some European churches.The next floor has blue coloured ceiling . Shri niwas is the name of next two floors, the top is also called the crown (Mukut mandir)temple. This is where the royal flag is hoisted.

The name literally means the auspicious palace . The era of its construction is 19th century end. The palace has a prominent influence of European design. The hanging balcony is testimony of the same.The palace has very intricate delicate carvings on its exterior façade. It is also situated in centre of a huge courtyard. The gate leading to Mubarak mahal also has fine carved elephants welcoming the visitor.The palace in those times was made to welcome the foreign dignitaries now it has been transformed into a museum. The palace was built by Maharaja Madho Singh II, He was a large man weighing more than 250 kilograms more than 2 metres in height ,your guide sure will tell you intriguing stories of the king.The first floor of the palace isreserved for display of textiles, silk fabrics, fine muslin,the best fabric made by the mankind on display over here. Highly embroidered ceremonial coats,Some very fine specimen of Kashmere Pashmina, The royal dress of Maharaj Madho Singh II . These textiles were part of Maharaj Sawai Man Singh II museum. The arches and the colonnades of the palace are as fine as fine embroidered dresses on display over here.

This was the hall of public audience, the room has been preserved as if the Maharaja is going to preside over the congregation today itself. Large well decorated chairs for the royalty a long table with English chairs. The durbar is complete with period furniture. The trophies won by the royalty are also on display. The walls are decorated with large size portraits of the Mahrajas. The ceiling painted golden with resplendent chandeliers and multi cusped arches with marble columns. Its an awesome display.

The royal arms on display. Many kind of daggers, shamsheers, Khanda (two sided dagger) These lethal weapons have been so ably decorated artistically. Handles made with ivory delicately engraved. The pistols with engravings and inlay work are amazing work of art. A horse with complete body armour is worth special mention, Matchlock rifles, khanjars so much on display if you have any interest in arms then this place is special for you.

Latest addition is a sort of art gallery where more than 3000 pieces of art are on display. You can see real artist in action and can get a portrait of yourself sketched over here. You can even buy some pieces of artwork.