The history of Indian Textiles can be traced back to the Aryan times and we get ample of references to the art of weaving and of making yarn in the Vedas. With the emergence of the art of weaving there developed the  Indian art of carpet and textiles.  Later associate arts such as embroidery work, knitting or the other form of needle work developed time  to  time and region to region.

Touring India can bring to you immense pleasures when you see the diversity of each state- this lies not only in geography or language but also in the art forms. The artisans of each region make their unique style and draw the inspiration for their art piece from nature.  India is such a country in the world where enough raw materials are available and thus the art and artisans find plentiful opportunities to flourish.

What are the oldest evidence of carpet weaving?

In India we do not find the real evidence of carpet and rug making in the pre Islamic time. The legends mention about them but these pieces may have been finished by the time. We find the oldest evidence of carpet piece in the Siberian Mountains which dates back to 5th century BCE. The Islamic countries like Persia and Turkey became the hub of carpets and India also got the inspiration from these Iranian and Turkish weavers ,plenty of them were invited in the Mughal times from Isphan and Constitonaple.

Probably the tradition of pile carpets came to India from Iran. During the regime of Mughals Delhi Agra Jaipur were the major center of rug making. Later Lahore and Srinagar also developed themselves as prominent carpet centers in Mughal time in 16th century A.D.

Indian art of Carpet and  Textiles during the Mughals

In the olden times while Chola was a great maritime power, India was a great trade center and carpets, cotton, textiles were the important export treasures. The rulers in the medieval India and specially Mughals started the carpet factories in their important cities. There factories used to have a large line of looms and were known as farrashkhana. There was a minister in charge of them and was instructing according to the needs of the royal harem and overseas exports.

What are the Important Carpet Making cities in India?

The important centers of carpet weaving in India are Mirzapur and Bhadohi in Uttar Pradesh. Besides Agra and Varanasi are rich centers for woolen rugs and silken fabrics respectively. Besides Srinagar in Kashmir, Jaipur in Rajasthan and Warangal and Elluru in Andhra Pradesh are some famous carpet-making cities. Since 19th century Amritsar also imbibe this tradition of weaving carpets in geometric patterns. This art is widely known as Mouri. The artisans in Agra and Bhadohi are so deft-handed that they produce quality rugs that vary from 90 to 140 knots per square inch.

What are Durreys and where are they made?

Durey is a simple form of carpet and is made of cotton woven thick fabric and used for spreading over the floor. It you embark on a village tour in India, you find the durreys weaving woven in the cottages. If you are doing Agra Fatehpur Sikri tour you can watch the durree making process in Fatehpur Sikri and you can also buy. Similarly in almost all travel destinations of Rajasthan, you happen to see this practice of making durree. Unlike the cotton durries which are very common, the durries of Jodhpur in Rajasthan include cotton, wool, and silk. The weavers are seen sitting cross-legged by the side of the loom and the geometric patterns are followed.

If you are doing the tour of Punjab and Haryana, you can see the ladies making yarn and sitting by the loom for making durries of their personal usage. Panipat in Harayana is a big commercial center of durree weaving where you see lots of migrant weavers from the districts of Farukhabad, Shahjahanpur in U.P.The other prominent durry-making centers in India are Navalgarh in Rajasthan, Salem in Tamil Nadu. The durrees at Salem are woven in silk and cotton with brilliant colours and have lotus flower as a central motiff.

How a Carpet is woven?

First of all, a pattern is decided and the design is made on graph paper. The loom is fixed and on one loom two persons can work together. A-frame is made by stretching the columns of thread on the loom.  These are referred as warps and are made of cotton. According to the instructions of the main weaver, the whole family or the weaving members follows these instructions in a song form. They fiddle with the yarn and make knots by knots of the required color. These knots vary according to the patterns like Turkesh, Persian etc. 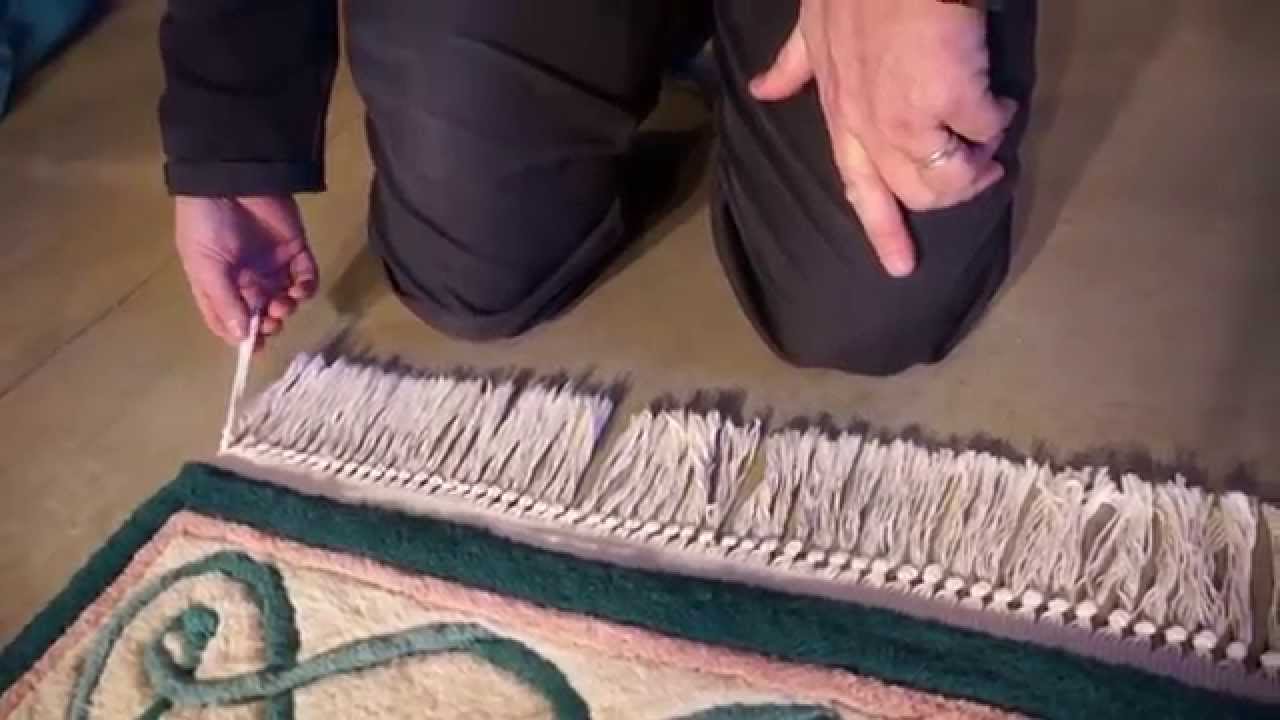