Paranormal and Haunted are all time favourite topics, These are very vividly discussed and covered by various media. A fort in the Alwar district of Rajasthan has been famous for unknown paranormal activity, many famous and very well known paranormal researchers have made documentaries on the Bhangarh fort , it has been a hot topic of research and gossip. Many Bhangarh video logs have been posted on famous video sharing platforms like Youtube. We also got intrigued by this topic and decided to decode this mystery by personally visiting the Haunted Bhangarh Fort.

The Bhangarh fort Rajathan lies on the slopes of the Arawali ranges near the famous Sariska tiger reserve. The nearest airport is the Jaipur airport lying at an approximate distance of 90 kilometers. This distance can be easily traversed in around two hours. In fact, you can do the same day tour of Bhangarh fort starting from Jaipur, Delhi is around 235 kilometers from the fort of Bhangarh .

Best Time to visit Bhangarh- Summers are very harsh in this part of India. Sightseeing encompasses lots of walking. The best time to visit the fort is in winter as it’s a vast open space. In summers the temperature scales upwards of 40 degrees Celsius.

Bhangarh Fort Story and folklore- The Bhangarh was a fortified city having temples, palaces, sprawling markets. The city was abandoned all of a sudden and since then no one resides in the fort of Bhangarh. No one is allowed to stay in the fort after the sunset, there are stories abound which forbid anyone to stay after the dusk. This fort was made by Raja Bhagwant Singh in the year 1573 ACE, this used to be a sprawling city with high walls, there were five gates guarding the inner confines of the city. King Bhagwant Singh made this fort for his son Madho Singh. After the death of Madho Singh his son Chatr Singh became the king,the province was crippled with famine and a possible earthquake, these were the probable reasons for the abandoning of the Bhangarh fort.

The popular folklore also cites the reason for the abandoning of the fort. The story most popular is of a curse inflicted by a hermit “Sakhie Seoda”, the hermit was infatuated with the beauty of princess “Ratnawali” daughter of Chatr Singh. Ratna wali was a beautiful lady the hermit wanted desperately to woo the lady, he used black magic for the same. Ratnawali also knew the secrets of black magic. She understood the evil designs of the hermit and negated the moves of the hermit. Once a favourite maid of Ratnawali went to the market to buy hair oil for the princess the hermit incidentally met her and cast his spell on the oil. Ratnawali again could read the spell and threw oil out of her window, the oil fell on a big boulder which started moving and fell on the hermit trampling him to death. It is said the hermit before dying cursed the city. The city inflicted with the curse was abandoned soon after.

There are some other stories abound but this is the most popular one and most famous of the lot.

Structure of Bhangarh Fort- Bhangarh was a fortified city nestled in the confines of the Arawali range. The ruins are two kilometers from the village of “Gola Ka Baas”, the highway passes through the village. You have to leave your car at parking almost two kilometers from the village on a secluded barren stretch of road. From the parking, it’s a walk of around one kilometer to the Gates of Bhangarh, as you walk this small distance you can notice the ruins lined up on the sides of the road. The ruins appear to be an abandoned market place this market was called “Johri bazaar” the market of jewelers. The dilapidated walls are some two-three feet high made of small blocks of sandstone, the rest of the structure is missing. A strange feeling strikes you when you walk through this deserted and barren road to the Bhangarh fort. This street was once a sprawling bazaar.

A huge gatehouses the ticket window after buying the ticket you pass into the palace complex, huge banyan tree with very soothing dark shade has scores of monkeys playing underneath. An amusing thing we have seen here is that the black-faced monkeys and brown macaques sit and play cheerfully. For the first time in my life, I see a macaque child playing with the tail of a black-faced “langoor”. The place owes an eerie silence. There is a yellow sandstone temple which featured in Bollywood movie “Karan Arjun” right next to the entrance gate.

The style of the temple is “Nagara”, the temple is no more in use by the devotees. The main building in its prime time was a seven-storied structure now only four stories remain. There are rows of abandoned and dark rooms fit for the ghosts and the dark creatures to abide. The steep steps lead you to the terrace, The terrace is all strewn up with rubble and remains of the “Tantrik” procedures. 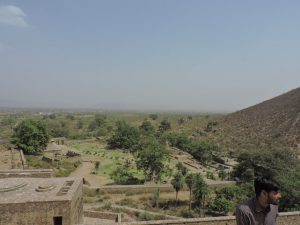 From the top story, the entire area is visible and offers a picturesque view. One interesting noteworthy feature on the terrace are the visible remains of “TANTRIC” rituals.

Tantra is a very wide topic it is very much practiced in the Hindu, Jain, and Buddhist religions of India. Tantra in simple words is the rituals and mechanisms which are used by the practitioners to establish contact with the ether world and get the requisite tasks done with the help of the said forces.

According to prevalent Indian mythology, a place that is deserted and has no one living attracts the paranormal. In India, the concept of paranormal is associated with dead people and their souls. It is said these dead live on in the afterlife in deserted places and are called “Bhoot”. This fort has been long deserted thus there is all possibility of the Bhangarh fort being inhabited by the “Bhoot”.

The monument caretakers though categorically reject these claims but one of them told us that the Hanumana temple at the parking lot of the deserted city prevents these dark forces to venture out of the precincts of the abandoned city.No one remains in the confines of Bhangarh after the sunset the village “Gola ka Baas” which is the nearest to the fort also appears lifeless after the sunset.

Schooling from St Peters College Agra did ICSE(X STD) and ISCE(XII STD) ,Graduate from Agra University Agra in Chemistry,Botany and Zoology,Post Graduate in Business Management (MBA)with major in marketing and minor field of study in Finance, Coowner and promoter of 10th Gate Tours dba S.A.M Tours and Travels from 2012 till now. Worked as Govt Of India approved Tour escort till 2011 (total experience of more than 10 years in hospitality trade)