In Hindu religions, light is symbolic of knowledge and spiritual wisdom. The darkness is the symbol of negative powers like violence, greed, injustice, oppression, and suffering. Being brutal and sacrificed in the name of religion is not past, it still is prevailing in the so-called modern society of India or elsewhere. There are people who strike a Faustian Bargain for petty reasons of money, power procreation, and for other gains. Many of these Strange Traditions are banned by different governments all over the world but still, we see some of them. As psychology says man is wild inborn, the process of evolution has evolved him/her to be refined. In India also you can find several unusual practices in various tribes, communities, and religions.

This ritual takes place in the Devaragattan temple in the Kurnool district of Andhra Pradesh India. On the eve of Dussehra thousand of devotees, wielding lathis hit each other on the head until the day break to commemorate the killing of a demon by Lord Shiva. Lots of people get injured in this practice annually. 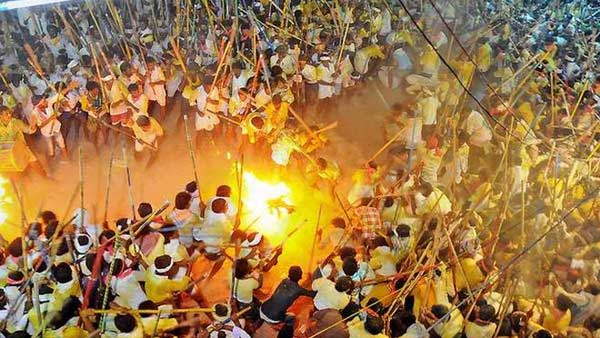 India has a long tradition of bonding with the snakes and people have much reverence to the snakes. Every year on the occasion of Nag Panchmi the devotees feed snakes with milk to have the blessings of Nag devtas. There is a lot of superstition associated with snakes in India, the charmers claim to make the snakes dance with their special flutes(Been) while truth is that snakes are making a move to attack the charmer who is playing flute, No one believes that snakes don’t have ear and can’t hear the flute, the snake charmers are believed to call the snakes by playing been-the flute, this practice has been made famous by the Bollywood movies, in fact, one such superstition is that snake charmer can cure a snake bite patient by recalling the snake because of this superstition thousands of snakebite victims fail to reach the hospital and get proper medical attention.

Self Flagellation- One of the Strange Traditions

This sort of practice is still prevalent. This is done in the name of religion for the atonement of sins done in past. In this ritual, the practitioner hits him with a whip attached with blades. This is more common in the Christian community of the Philippines and Mexico. Even in the Shia cult of Islam, it is done in the countries like India, Iran, on the eve of Muharram. Christians believe that by doing this they can attain a better position in heaven. On the other hand, Shia followers do it to commemorate the martyrdom of Hussain.

This ritual is being practiced in India since centuries. This is common in the south Indian states of Karnataka and Tamil Nadu. In the month of December, the babies are caught by a group of people sending beneath with a piece of clothes. The married couples who desire to have more procreation involve in this ritual. 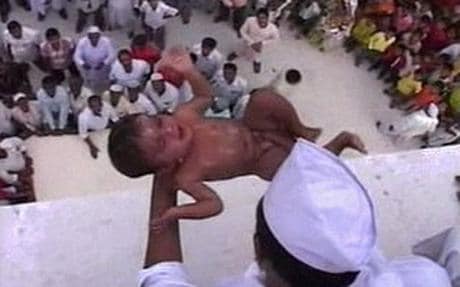 This ritual is practiced in some African countries and it is linked with religion and custom. In this tradition, a razor or blade is used for external genital in partly on totally. This ritual is done in order to restrain the girls from illicit sexual relations. Thus the girls can refrain from pre-natural sex

In this ritual, one pierces himself with sharp dangerous objects like swords, spears, needles, etc. This is common in India and Thailand. This is done with the belief that the holy powers enter the body of the participant and give protection from the evil forces. Thus it is the harbinger of good Luck

In this ritual popular in Dani tribe of Indonesia and japan one chops down the finger. This is done for the purpose of mourning for the deceased member of the family.

Few communities like Hindus in Asia and the countries like Greece and japan witness such practice. In this one walks bare feet or the embers as a gesture of respect towards the almighty. In India, this festival is celebrated as Theemithi in Tamilnadu. The legend says that Draupadi after the battle of Kurukshetra walked on fire to prove her chastity. Thus this festival is celebrated in the remembrance of the event.

This is a strange activity performed on Chindwada district of Madhya Pradesh. Festival is similar to the Tamatino festival where people throw tomatoes on each other. In contray to this  In contrang to this the tomatoes takes place of  a stone pebble. People on the eve of Dussehra congregate together and palt stones on others and thus rejoice. This is celebrated with great religions fervor. Similar traditions occurs in the bang region of uttar Pradesh where in the villages people throw the needy water mixed with cow dung to celebrate Holi festival.

Embedding of half body on Earth

This is a strange activity performed by the Hat Yogis. The sages embedded their bodies in the earth. They live whole day & night standing in the earth with the lower part down in the soil and the upper part of the head open to the sky. This ritual is performed as a penance for the past deeds and for the purgation.