The easiest way to feel the pulse of the richness and diversity of Indian cultural traditions is through the medium of folk art. So far as folk dances are concerned they have a variety of features in different terrains of India. India has a large legacy of classical dances. In comparison to the classical form of dances, the folk dances are much popular as they are easier to perform and understand. The Southern state of India- Kerala is very popular in folk dances like other parts of India. The present blog focuses on the famous traditional dance of Kerala. You come across the various form of popular Kerala folk dances of such as Kathakali, Mohiniyattam, theryan etc these so forms of dances have their unique features of presentations and expressions.

The diverse forms of folk arts of Kerala are not only confined to the state but the prominent forms have acclaimed national and universal recognition, these dance forms focuses on mythological dance drama and consist of elegant costumes, heavy makeup and expression of diverse Mudras (Movement of fingers and palm). Music for this performance is provided by Karnatak style with toppi maddalam (barrel drum) and Vina (lute). Thus dance form was very popular from 9 to 12th century during the reign of chera dynasty. The leisurely movements of the performer, elegant costumes, traditional jewellery enchant the audience.

Mohiniyattam – this is one of the most popular dance forms of Kerala. It is performed by solo female dance as it’s name signifies – Mohiniyattam. This word is made by the blend of two words – Mohini and Yattam.

Mohini means maiden while yattam signifies dance. This dance is a sort of synthesis of Bharatnatyam and kathakali. The legends say that during the sagar Manthan (Ocean churning) event lord Vishnu disguised himself as Mohini and perfomed dance. Just to make the event this form of dance was very popular among the Devdasis. 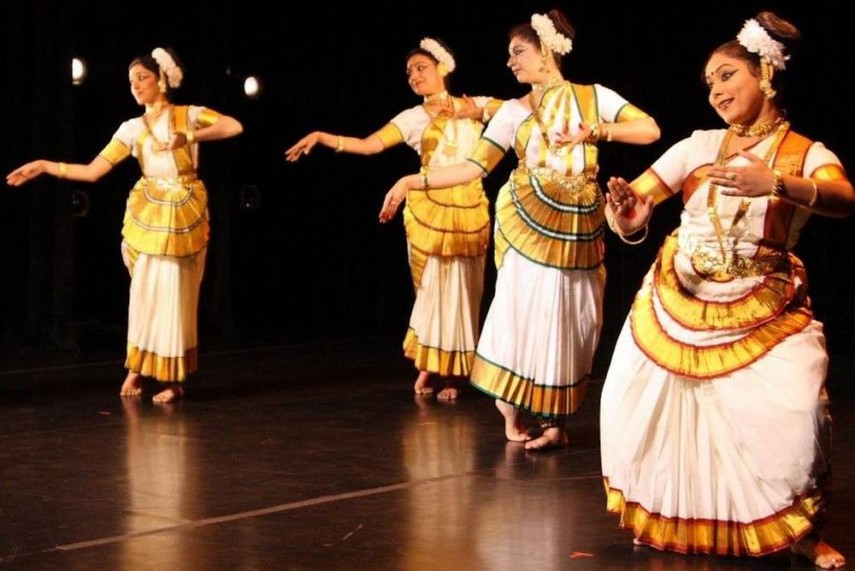 This famous dance form of Kerala which originated in the 16th century A.D invohies soft footsteps, sober construes in white and gold with the accompaniment of Carnatic vocal music. During the British epoch, this form of dance was redialed on account of Devarsi tradition. Subs equally same laws were framed banning it. In the later stage, the renewed interest of Keralite masses helped it in Mohiniyattam’s revival. Originally the dance was performed solo but presently in the modern era, it is also performed in groups.

Kathakali- One of the top Kerala folk dances

This is one of the most noteworthy dances of Kerala Kathakali literally signifies “story Play” Katha means story and Kali signifies play. This dance form has a history of 500 and is a perfect fusion of dance, music, melodrama religions there, choreography, and gestures.

The drama portrayed in Kathakali’s performance is based on mythology and legends. The themes are adapted either from the Mahabharath or the Ramayana or from the purans. The aparts of Kathakali are derived from old Sanskrit texts such as Natya Shastra.

Kathakali Make ups– The most sticking feature of this dance is the 5 types of make ups with paints of various colours. These are called vesham and signify a special character in dance. These veshans are – Pacha Kathi, Munukku, Kari and thadi. The magnificence of Kathakali lies in it’s décor like kireetam (big ornamental headgear and the Kauchukam (oversized Jackets).

Theyyam – This is a very popular dance form of the Malabar area of Kerala. The word Theyyam is supposed to have origin from the corruption form of “Daivan” which signifies God in Malayalam language. A key point of Kerala’s Art form is that most of the dance forms evolved from the temple rituals and are based on the mythological stories of deities. Theyyam is one such type of ritual and is supposed to have nearly 400 variations. The performers of Theyyam belong to the lower caste. Most of these 4 performers are male. Only in Devakoothu Theyyam is the only are performed by women.

Scores of temples of Kannur, Nileswaram, Karivalloor celebrate Theyyam performances every year. Which include dance, mime, and music. From December to April one can witness Theyyam performances.  In these Theyyam rituals, each artist represents a hero with great power. The artists are clad in flamboyant costumes and wear heavy makeup. Their headgears and ornaments captivate the heart of the audience.

Velakali – One of the most popular Kerala folk dances

This popular art form of Kerala is a sort of martial dance in which the performers.  Showcase their expertise of body movements with swords and shields. The performances are done on the tunes of musical instruments such as Kombu, Maddalam etc.

This dance form is a kind of allegorical expression of the war between kaurawas and Pandavas. During the dance huge effigies are put at the eastern entrance of Padmanabhswamy temple and they represent pandavas Valakali dancers represent the Kaurawasand their dance represent the battle between cousins. This performance depicts the victory of dharma over adharm and the victory of Bheem over the Kauravas. 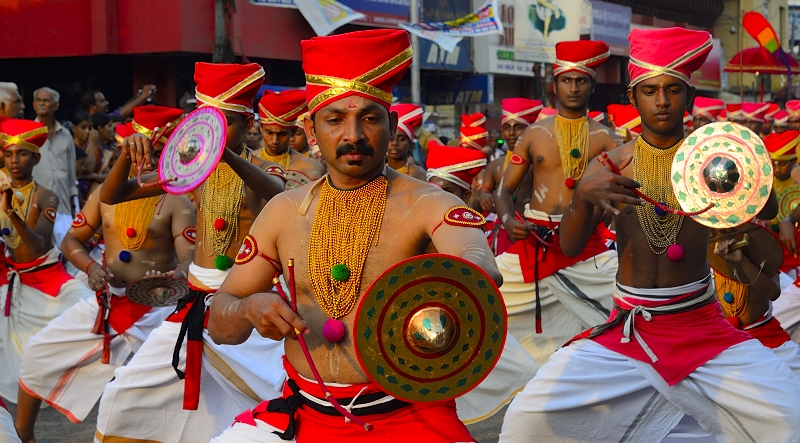 Thiruvathirakali- one of the most popular Kerala folk dances

Thiruvathirakali is also known by the name as Kaikottikilis. This is a special dance performance done by the group of women on the auspicious day of thiruvathira which is the birthday of lord shiva. It is celebrated in the Malayalam month of Dhanu. The principal reason behind the performance of this dance is to delve deep into everlasting marital bless and for longevity of the spouse. Thus the ladies invoke the shakti who revived the cuprid from the wrath of lord Shiva.

Story Behind Thiruvatirakali – The story of this dance ritual can be traced back in the Hindu mythology. According to the legend a widow larnerited incessantly on the loss of her consort. This Laurent was so powerful that it cleft the heart of Parvati and she persuaded lord to revive the lady’s husband. Lord shiva had to suverder to the coercions of Goddess Parvati. Just to mark the event the ladies perform this dance for the long life of their husband. In this dance performance a lamp is lit and around it ladies make dancing movements with clapping of their hands and singing.

Kutiyattam – This is a famous temple art form. In the dramatic performance both men and women take part. The male performers are from chakkiyar community while the female are from Nangiyar community. They perform for 6 to 20days inside the temples. Sanskrit verses are recited with music of drums and cymbals. 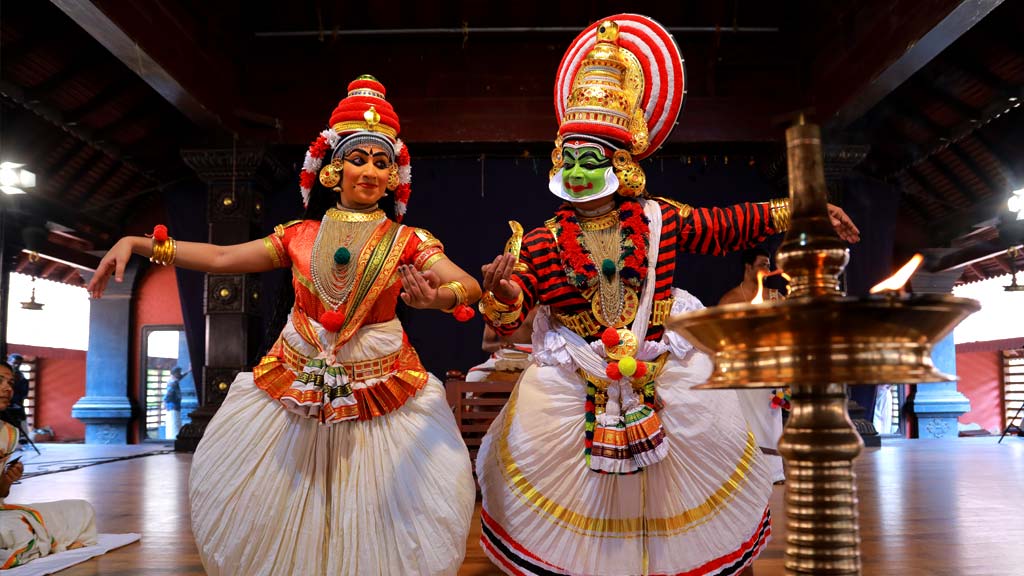 Chakyar Koothu – This is most refined traditional dance form of Kerala. In this performance the dancers narrate the scenes from the epics of the Ramayan and the Mahabharat. This dance is performed inside the temples on festivals and other auspicious occasions. 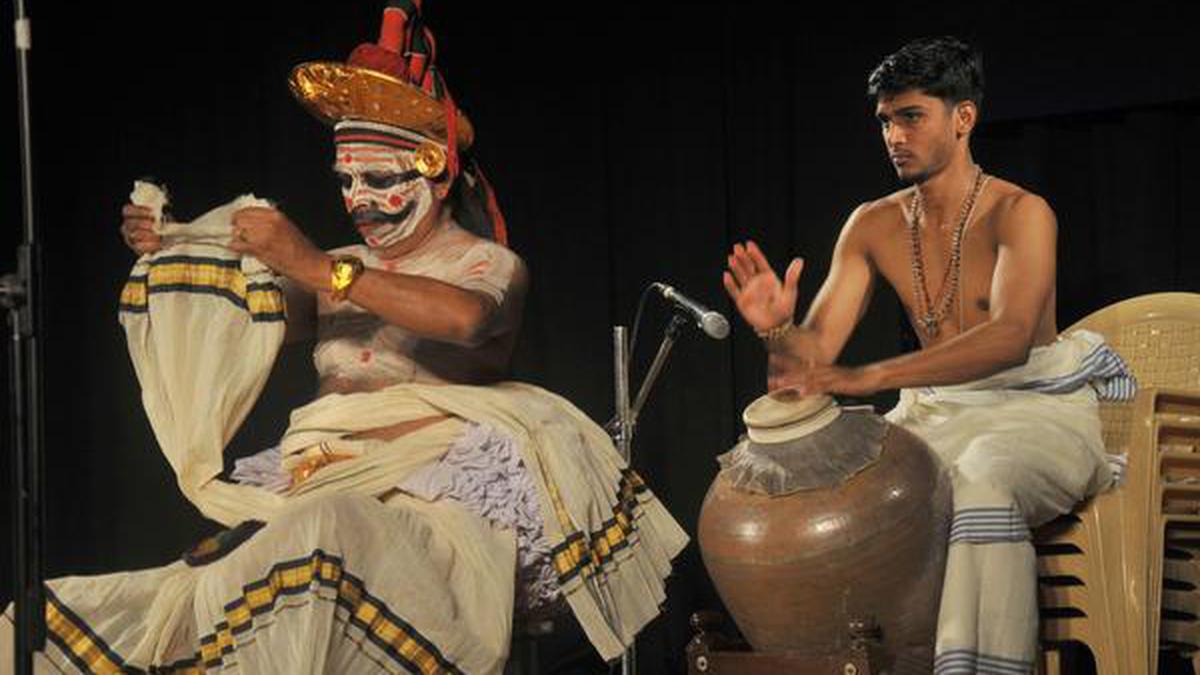 Kavadiyattam – This dance is performed in all subramanya temples. As peacock is considered the steed of Lord Subramanya, the performers carry a bow adorned with the plums of peacock the devotees stick the offerings at the end of a long pole and sing devotional songs.

Kolkali- This dance is one of the most popular dances of Kerala. In this a group of 24 performers from the agrarian class take part. Wooden sticks are used by the dancers as props. Both ladies and gents move in a circular nation beating their sticks and thus enjoying the mirth. 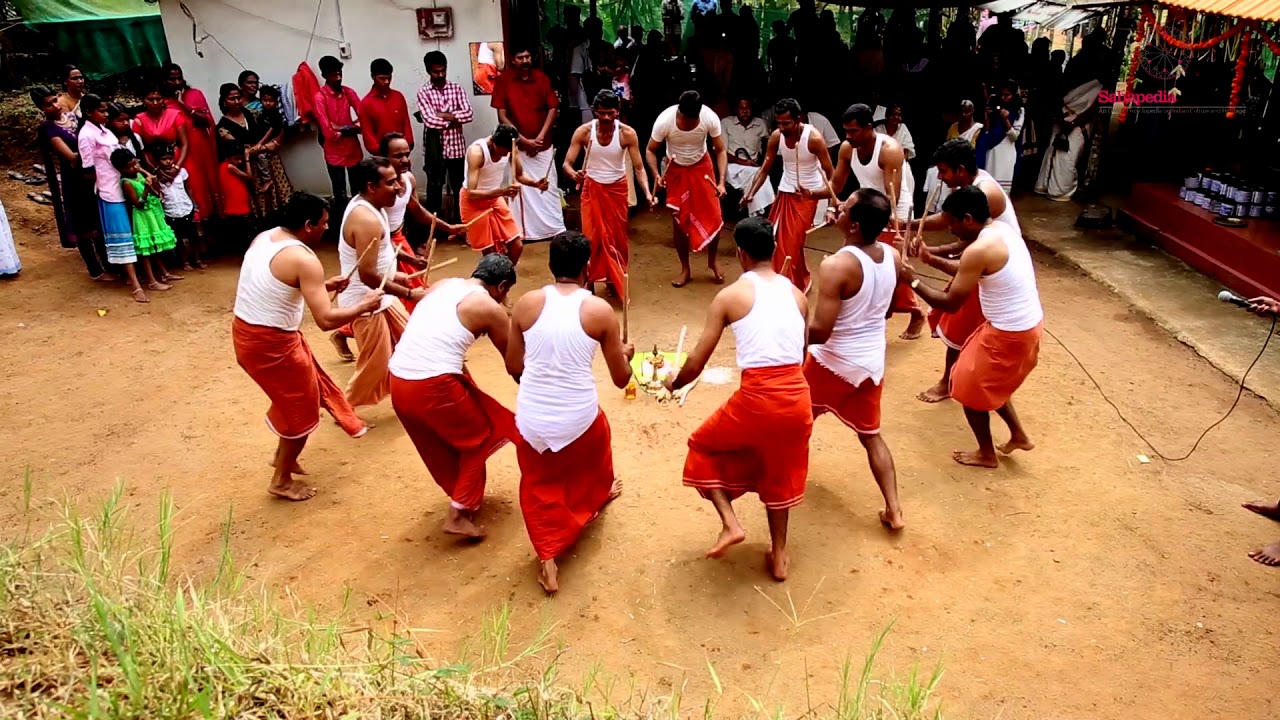 Padayani- Padayani literally signifies a roul of soldiers. This ritualistic dance performance is done in Bhadrakali temples from December to may. This is performed to appease goddess kali who turned furious after Danuka’s death just are type of Musical instrument is used to relate the song called the Thappu. 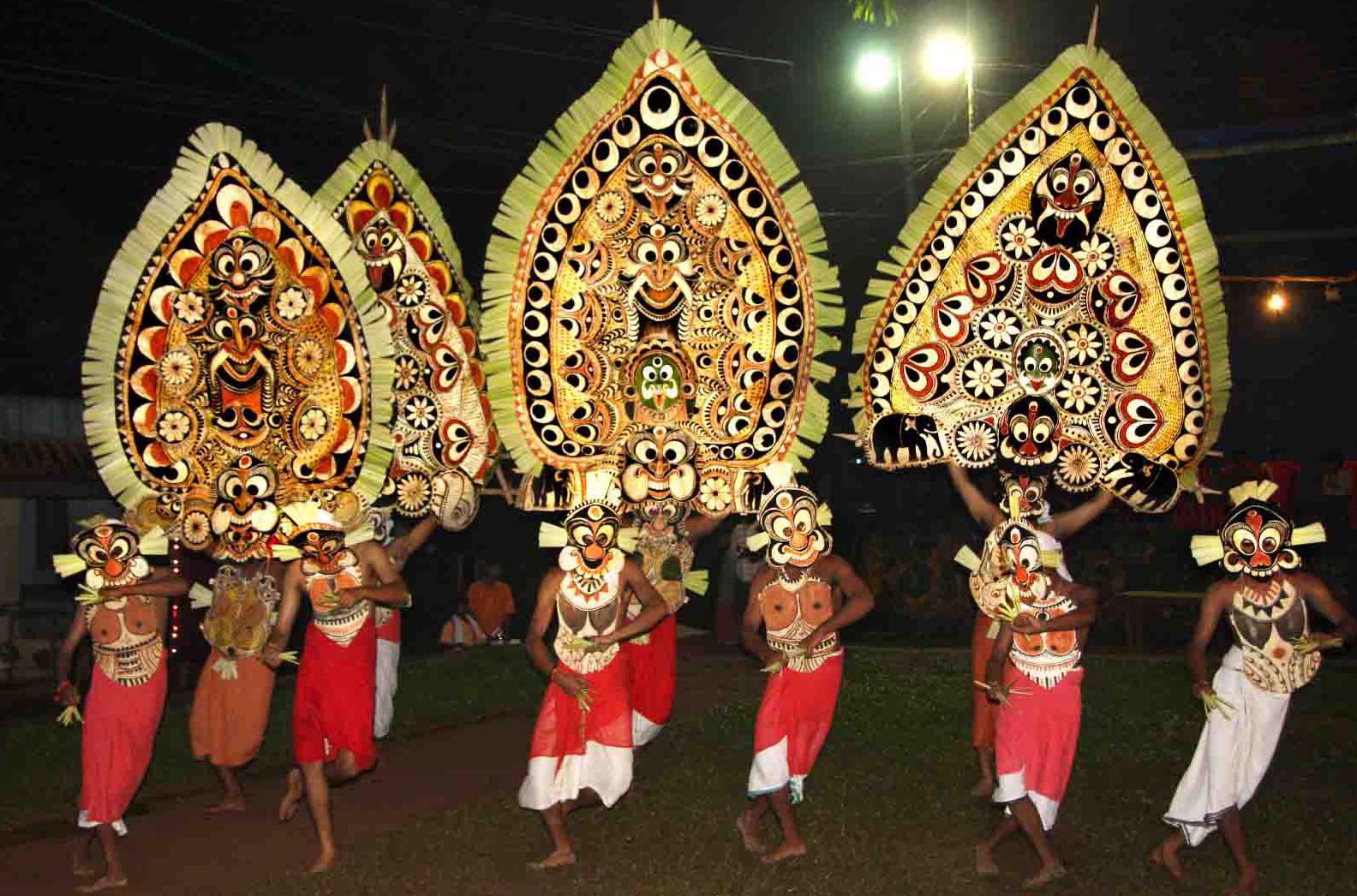 Kalaripayattu – This is considered as the mother of modern martial art. This was practiced in the older era by the warriors to gain power and learn to ways of self defence. This art form involves activities like jumping, running etc some special features of the combat are oil massage and the use of old weapons. 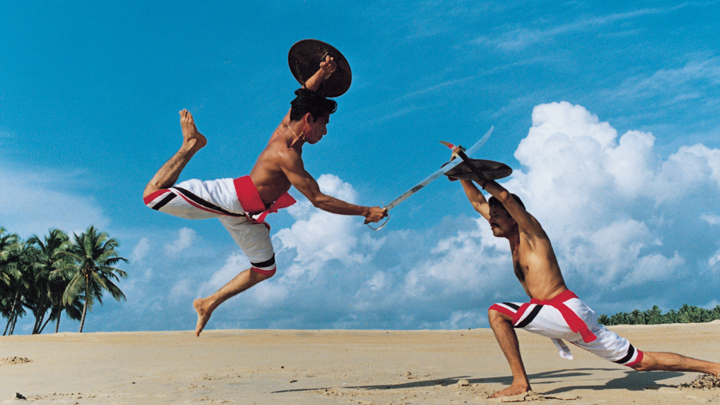 Pulikalli- One of the top Kerala folk dances

this is performed by the deftly handed artists to entertain guests on the eve of Onam. Which is a major harvest festival of Kerala the dancers paint their bodies to give the impression of tigers. The men move about like tigers with huge bellies. 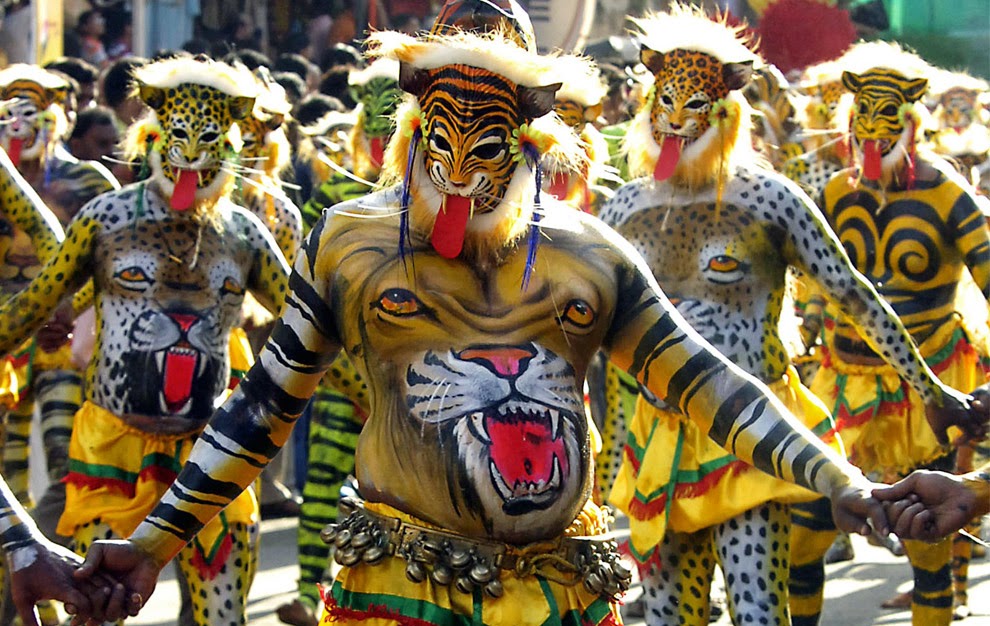 Thullal – The word “Thullal” literally signify to jump about in mirth. This art form developed in Kerala in 18th century. This ia a solo performance combining both dance and recitation. In this dance form the tale is derived from the Puranas and narrated in verse.