The word Mujra signifies “to bow down” and pay respect to God, their spiritual Guru and the spectator before starting their performance. Common thought is that it is merely an erotic dance performed by the dancer to please a ruler or the important noble. But this perception is not right and attributes sometimes wrong connotations. Actually this form of dance theatre called “Mujra dance” became into the vogue during the era of Nawabs in Lucknow. The way the Bollywood has presented the theme of Mujra cannot be a real form. If you recall in Marathi language if you are paying respect to a man of high stature it is called Maracha Mujra.

How Mujra was born?

During the British rule Nawab Wajid Ali Shah was the last Nawab of Awadh. He was a great patron of art, culture and drama. He gave place to various eminent performers in his court. There were 2 classic Kathakars namely Kalka Maharaj and Bindadeen Maharaj. This duo developed and tuned up the classical dance form of Kathak. The Nawab was also an avid dancer he also learned and perfected this form of dance. Thus the roots of dance were developed as the two ustads who initiated Lucknow Gharana trained the lady dancers, clowns and Bhands.

What Mujra is made of?

Mujra comprises of the fusion of native kathak dance and native music of Thumris and Ghazals. It also includes the poems and it was performed at the Mehfils and in special halls “kothas”. This art was passed on generation from mother to daughter. These courtesans were very witty, powerful and resourceful.   They had access to the royalties and important people.

This dance form has been a popular subject for Hindi movies. These movies of 70 and 80’s present a vast canvass for Mujras where the audience get to see the real Mujra on screen which was earlier limited to the courts. There is a popular movie called Shatraj ke Khiladi which presents a real Mujra. In this film Nawab Wajid Ali Shah is screened indulging in his game of chess with utmost care and the performance of Mujra goes on. This movie was directed by Satyajeet Ray. There are some other Bollywood movies such as Umrao Jaan Mughal-e-Azam, Pakeezah where the Mujra seenes were recreated and took you to the bye gone era of the rulers. 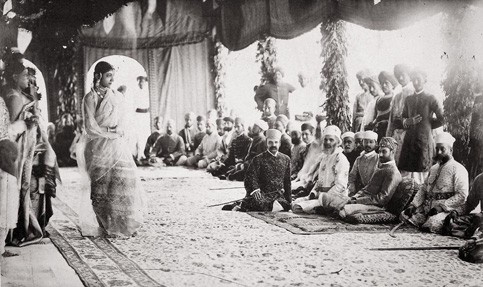 Presently if any actor performs on the stage of any auditorium he or she bows down similar to those courtesans or Tawaifs which were in the royal courts. Besides there were some who were performing at their respective kothas. These nauch girls or the Mujra girls held power and wealth and also learnt Persian and Urdu literature, mannerism music and steps, During the British era there was much influence of Mujra girls on the respective rulers. The British tried to reduce the powers of the Mujra girls by devoiding them from property, land, discrediting their patrons and using them as prostitutes for their soldiers. During the downfall of Mughal dynasty in the famous mughal cities like Delhi, Agra, Lahore there were places where the Mujras used to be held. Basai in Agra is such a locality. During the British times some of these places started to be used for prostitution. Later British made some anti-courtesan laws.

Since few decades back a new form of Mujra has started in Punjab and Pakistan. It is a sort of hyper-sexualized form of dance suiting to the young generation. These Mujra performances are done in commercial theaters and halls and you can enter spending few hundred rupees. In Pakistan, in 1980 Zia-ul-Haq the then-president threw many dancing girls from the Red Light areas of Lahore and Multan to the outskirts of these cities which later gave rise to the epoch of commercial Mujras. 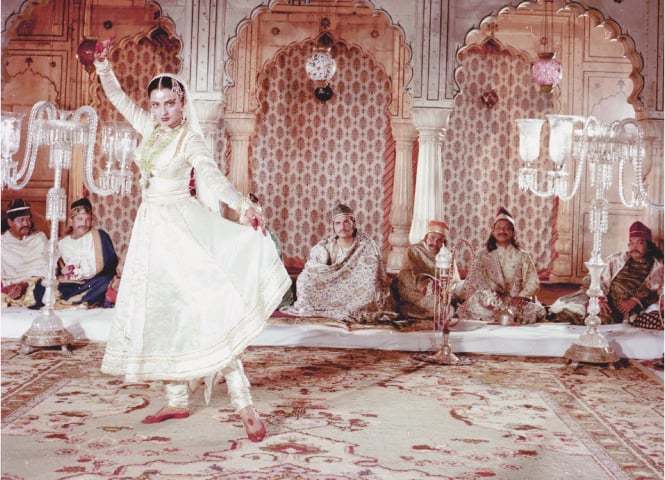 In Modern times Mujra performers exhibit their art in events such as weddings, birthday parties. After the ordinance of the closure of the dance bars in Mumbai, many mujra girls moved to other places of Mumbai such as the grant Road area. Once upon a time Agra, Lucknow and Lahore were the prime centers of Mujra. These Mujra girls bore different names such as Tawaifs in North India, Baijis in Bengal, Bar girls in Maharashtra etc. Lollywood(named after Lahore) which was the then center of Indian Movie production had also produced movies showing mujra tradition Noteworthy is the movie “Anjuman which was released back in 1920.

Nautanki is a traditional art form of Uttar Pradesh and adjoining areas. In this a dance drama is presented before the audience. This has been very popular since ages in India, the basic Nautanki tells the stories of Harish Chandra, Sas Bahu episode, Amar Singh Rathore, eulogies, and chronicles of the famous dacoits of Chambal etc. At the outset of the show, the dance is presented by the girls in the form of Mujra. The difference is that in place of a hall or the kotha it is presented on an open stage. The audience is not only selected nobles but the masses. In the traditional way of Mujra. You get to see in the Bollywood movies the gathering is sitting on the couches enjoying hubble bubble (Hookas) and chuskie with Paan. The performer dressed in elegant attire dances to the tune of harmonium and thumps of tabla. The dance girl with all her gaiety tries to allure the spectators.

Tags: How Mujra was born?, Mujra in Bollywood, Mujra in Pakistan & India, Mujra Scene in Nautanki, What Mujra is made of?

The Importance of Number 7 in Indian Culture