The north western state of India is the Punjab. Punjab the land of five lines was called “Sapta Sindhu” in ancient times. Fertile soil and surplus water invited industrial and laborious people to Punjab. The Sapt Sindhu or the United Punjab comprised of the Punjab state of Pakistan and states of Haryana, Punjab and Himachal Pradesh on the India side. Punjab has been the Gateway to India for the migrants from central Asia, with adjacent states of Kashmir, Rajasthan, Sindh, frontier area the Punjab has a very rich culture and has multiple languages, Though Punjabi is the main language but it also has many accents and dialects. So far as the Dances of Punjab are concerned there are a series of folk dances performed in Punjab.

The people of Punjab are tall healthy and are known for smartness and beauty. Since there are three main religions practised by the Punjabis, The Haryana is predominantly Hindu while Indian Punjabi has Majority Sikhs Pakistani part is all Muslim. The north western Part of Pakistani Punjab has a sizeable pathan population, the culture of the Pathans living in Afganisthan and Pakisthani Punjab is not very different so are the dances and folk customs. The jats, the Kamboj, the Pathan all immigrated to Punjab in different time frame from central Asia so the folk and culture of Punjab has a lot of similarity with central Asian nations. The folk dances of Punjab are divided on the gender ground of male and female. Mostly performed by male dancers who dance on the  beat of drum and swing movement of their upper limbs.

Bhangra – One of the Famous Dances of Punjab
The area from Lahore right up to Gurdaspur (just next to the Shivaliks), Amritsar comprises of Majha mainland, this area was the capital of Sikh empire of Maharaja Ranjit Singh, the youth of Majha area are known for their physique. They speak the Majha dialect of Punjabi which is actually the Punjabi spoken on the Doordarshan Jalandhar. In this heart land was born the most famous iconic dance of Punjab the Bhangra. This dance is famous across the world, the pubs, the restaurants and discotheques in london dance to the tune of Bhangra beat. The Bhangra drum beaten with a heavy stick on one side and a lighter one on other sets the stage for a group of male performers dressed in classic Majha turban decked up in classic chadra and kurta. The “shamlas” or the protruding parts of the turbans sway high. The Bhangra is a fast paced dance never complete without the typical rhythmic beat of the drum.

The Dholi or the drummer is the center of attraction and the performers usually perform around him. The swaying movement of upper torso combined with the drummer playing full note displays the vigor of the youth. Generally it is said that Bhangra is a harvest dance, its partly right as it never was performed in the fields. The harvest season was always coupled with the “melas” these melas had the rural youth visitors who were entertained by the Bhangra troupes and the stage was set where everyone participated and danced to the tunes of the “Dholi” Nowadays the local fairs (Melas) have lost their luster but Bhangra has gone cosmopolitan, there are Bhangra schools in US and Canada where lots of Indians and westerners dance to the tunes of Bhangra and learn this style.

Giddha – One of the Popular Dances of Punjab
While Bhangra is domain of the males the Giddha is performed by females. Most of the Punjabis reside in villages. Indian Punjab has more than 12000 villages. These villages since ages were fully independent units. According to Indian Punjabi custom the girls are all wed outside the village into other villages. There is a festival celebrated in every Punjabi village this festival is “Teian” the festival of monsoons (In Haryana its called the “Teej”festival). The girls of the village even those who are married return to their parental village and in the month of sawan the village girls collect outside the precincts of the village in an area of trees. The swings tied to the high branches of stout mango trees, the collection of girls  dressed in their best attire makes up the stage for the “Giddha”.

How Giddha is Celebrated in Punjab?

Giddha is a dance which requires no musical instruments, the girls and the women first orate a poetic couplet and the same is reciprocated with rhythmic clapping and feet movement. The gathered ladies base these poetic couplets known as “Boliyan” on their personal experiences. They share their experience in the house of their in laws, mostly the mother in law is the favorite topic of the married girls. This mela or the gathering continues for the entire month of Saun and Giddha is also performed everyday. Marriage is next big occasion where all the relatives of a Punjabi family get together, Bride/grooms -maternal and paternal relatives participate in elaborate marriage rituals. In the night time the ladies get together form a circle and amidst the claps and Boliyan the Giddha is solemnized. Punjabi Village is a big extended family the ladies of the house get gather at night and a sort of procession is taken out with one of them carrying a decorated “urn” on their head the rest of the ladies keep on performing Giddha, Choicest boliyan are sung. This is called “Jaago”. Jaago is a also a sort of invitation to the villagers for the marriage or behalf of the family.

Giddha Festival in Modern Time
In the sway of modernity these customs have also changed, A lot of fan fare with decorated lights now are used in Jaago. Professional Giddha performers are now days hired for Jaago function. In marriage after the newly wed bride arrives at the grooms house the ladies of the house gather for an inspiring session of giddha, the older ladies with the faces covered by chunnies orate boliyan and make amazing sequence of claps and nostral vibes though this is fast becoming extinct.
Nowadays very few villages solemnize the “Teiyan” but Giddha survives as it has been taken up by the younger generation the groups of students in universities and colleges perform Giddha in inter university meets thus preserving the culture and taking it to next generation. The Punjabi diaspora now settled in US,UK, Canada also celebrate these festivals, Teeian da mela can be seen in all these Punjabi areas.

The Indian Punjab was bifurcated into three states of Haryana Punjab and Himachal Pradesh, The area of Punjab south to the Satluj river right up to the desert state Rajasthan is called Malwa. This dance takes name from the Malwa area. Through ironically it has nothing common with Giddha. Giddha is performed by females while Malwai Giddha is domain of male performers. The dress of the performers unlike the Bhangra performance is classical Malwai with flowing chaadras (wraparound sheets) white kurtas and white Pagris (turbans) swaying with long plumage.
The dance unlike Bhagra is a very slow affair. The Bhangra is fast paced with a big a dhol(drum) while Malwai Giddha has many musical instruments dholki (a small drum) the chimtas (iron tongs) Algozas, are all played. One of the performer first says a couplet known as Boli then the other performers who stand in a circle after the boli start playing instruments and with subtle movements the Malwai Giddha carries on. Bhagra is often due to the energy  requirement is done by the youngsters while Malwai Giddha is seen done by the senior citizens with flowing white beards. The Bolis are based on old Punjabi culture and lifestyle. 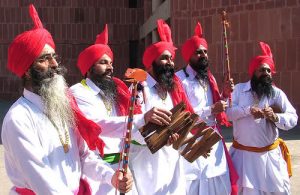 Facts about Sammi Dances of Punjab

This dance is from the Lehenda Punjab or the western Punjab it basically is from the sandalbar area. The word bar means the jungle. This dance form belongs to tribes like Baazigar, Sansi, Rai, they link this dance to their state of origin the Rajasthan and the Marwar area, The story is of a king and the princess named “Sammi” the dancers (women) dress up for the occasion in Kurtas and Tehmad, the hairdo is done specially and an ornament is tucked to the hairdo specially associated with Sammi dance. The dancers dance to the tune of a drum and other instruments they dance in a circle with a long sway and claps of their upper torso. The head is covered with a rectangular cloth “Bhochhar” the background is of song known by the name “sammi”.
One interesting fact shared is that the dancers while dancing fall in a trance and and are said to be in possession of supernatural who control the movement of dancers. 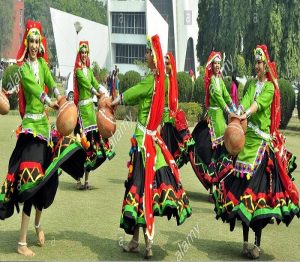 Dhamaal – One of the Popular Dances of Punjab

Sufism is the soul of Islam in this part of the world. Though Islam is not very well known for singing and dancing but Quawalli and Dhamaal are a part of Islam, Because of Sufi influence lots of people had chosen Islam as their religion. Sufism coming from turkey brought a peculiar dance form known as Sufi Dhamaal. This is similar to the swirling Dervesh of turkey but over here the Dervesh swirl and dance to the tunes of drums (Dhol) the tempo is high and the sufi Dervesh perform this dance reaching the trance stage. usually this dance was seen on the Jumma night (friday night) at the Sufi darbars but owing to the deadly terrorist attacks this is now usually performed on the anniversary (URS) celebration. The Dervesh (Sufi mystics) wear long flowing ropes with a band of head gear.

The dance takes inspiration from the word “Jhoom” which means swaying. There is no drummer, there is no fast music but just subtle moves of the dancers who elegantly move to the back ground music the movements are both by the feet and the hands in unison, Rhythm is more important aspect in this dance form. The dance troupe performs in unison and are a treat for the on lookers. The Jhoomar has many forms, based on the region the dance Jhoomar is known by the name, Beas Jhoomar, Satluj Jhoomar, Multan Jhoomar, very small changes occur in the dress up of the dancers and the back ground music.

How Varanasi to Taj Mahal Tour Made Easy?

The Importance of Number 7 in Indian Culture